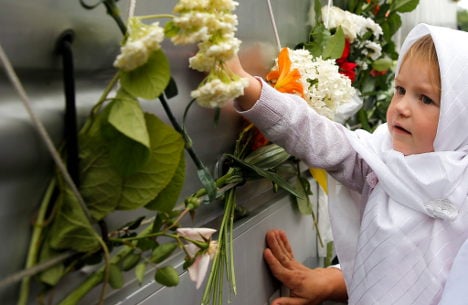 Bosnians are commemorating 20 years since the Srebrenica massacres. Photo: DPA

“I came here at the time when we remember the Srebrenica genocide… I think that we all need the courage to create such a future in which really horrible things could never happen again,” German Chancellor Angela Merkel told reporters in Sarajevo.

Bosnia on Saturday commemorates the 20th anniversary of the massacre in the eastern enclave of Srebrenica in which Bosnian Serb forces killed some 8,000 Muslim men and boys, shortly before the end of the 1992-1995 war that claimed some 100,000 lives.

Evoking the friendship now between France and Germany “after 100 years of war,” Merkel said the Balkans too should become a region whose people no longer fear the outbreak of new conflict.

She listened to the testimony of a Srebrenica massacre survivor and met several women whose loved ones were killed there.

“It is particularly important to remember the victims and to reflect on the past, but that should be done along with an eye on the future,” Merkel said, adding that she had noted a will to do this by the country's leaders.

The Srebrenica massacre is the only episode in the inter-ethnic war in Bosnia to have been qualified as genocide by international courts, but it remains a matter of dispute between Muslim and Serb communities in Bosnia.

Muslims want Serb leaders to admit that the slaughter, the worst atrocity in Europe since World War II, was a genocide, but the latter stubbornly refuse.