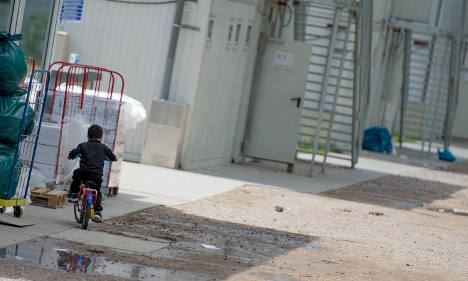 EU leaders agreed last month to take in 60,000 people over the next two years but on a voluntary basis after many member states objected strongly to proposed mandatory quotas.

The figures comprise 40,000 Syrian and Eritrean asylum-seekers already in Europe who will be redistributed across the 28-nation bloc plus another 20,000 Syrians in camps overseas.

The two countries had a duty “to offer a dignified welcome to those with refugee status,” Cazeneuve said.

At the same time, the countries had set conditions to ensure “that what we are doing out of solidarity (with other EU states) will be sustainable.”

He said it was essential that reception points for migrants be beefed up to ensure that genuine asylum seekers are clearly separated out from economic migrants who will be returned home.

Disagreements remain among EU nations over how to share responsibility for the refugees and asylum seekers. Spain and Austria did not want to announce on Thursday what their contribution to the effort would be, European sources said.

De Maiziere told reporters in Luxembourg “there are some countries which have problems with the concept and are afraid it will only encourage” more migrants.

Italy, Greece and Malta have borne the brunt of the migrant influx and Italian Prime Minister Matteo Renzi has repeatedly urged his European Union peers to do much more to ease the burden.

At the late June leaders summit, Renzi was said to have lashed out at his colleagues after mandatory quotas were rejected, reportedly saying that “If that is your idea of Europe, you can keep it!”

EU president Donald Tusk, a former Polish premier whose country opposed the mandatory quota system, said after the summit that member states would submit their voluntary offers by mid-July.

More than 140,000 migrants have crossed the Mediterranean so far this year, most of them landing in Italy, Greece and Malta.

Thousands more have crossed by land, many reaching Hungary which said last month it would build a four-metre (13-foot) high fence along its border with Serbia to keep them out.