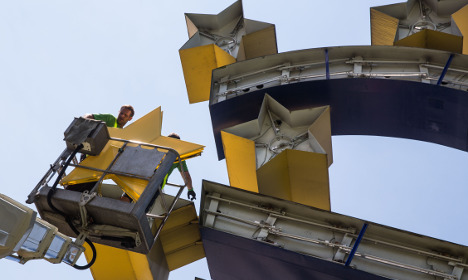 A worker on a crane removes stars from the Euro sculpture in central Frankfurt. Photo: DPA

While the eurozone's leaders buckle down for what could be the most decisive talks in the relatively short history of the single currency so far, few will fail to see a certain symbolism in the dismantling and renovation of the 14-metre (45-feet), 50-tonne sculpture that has become one of Frankfurt's most photographed landmarks.

The huge neon sign is the work of artist Ottmar Hoerl and was erected at the foot of the then headquarters of the European Central Bank in Frankfurt's financial district in 2001.

Last year, the ECB moved into its new, spectacular twin-tower headquarters in the east of the city.

The sculpture shows a blue Euro symbol with 12 yellow stars representing each of the single currency's initial member countries.

Hoerl's cartoonish sculpture, loved and loathed equally by Frankfurt's inhabitants, remains in the green belt of park that girdles the city centre.

It was here, at the foot of the Eurotower headquarters, that the anti-capitalist protest group Occupy camped in a makeshift village of tents for months during 2012, in protest against the perceived greed and corruption of banks.

Time has left its mark on the sculpture, however, and it is looking increasingly worse for wear.

So, the non-profit association Frankfurter Kultur Komitee has decided to completely renovate it for the first time in 13 years at an estimated cost of €60,000.

The group originally bought the artwork for 350,000 euros.

As part of the renovation, the sculpture will be taken apart and cleaned.

Its blue and yellow acrylic glass panels will be replaced.

Its 330 neon light strips will be swapped for energy-saving LED lighting, slashing power consumption by 80 percent and cutting electricity costs from the current 12,000 euros per year.

The work is being done by young apprentices from a Frankfurt school and from the city's craftsmen's guild.

The project is being financed with donations, including the ECB itself, the German central bank or Bundesbank, a number of private banks and private individual donors.