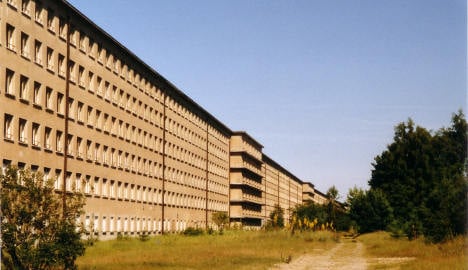 When the Nazis started building the Prora Colossus on the island of Rügen in the Baltic Sea they envisioned it as a mighty symbol of the unity of the German people.

It was to be a place where German workers could enjoy a bit of downtime on the beach, watch movies at the cinema or go on boat trips in the Baltic Sea, all in the company of their fellow 'Aryans'.

Each of the 10,000 apartments would be identical in size and style. Each would have a view of the sea.

Run by the organisation Kraft Durch Freude (“Strength through Joy“), the apartments would have given ordinary workers the chance to holiday by the beach for two weeks each year.

This was fascist utopia realized in 4.5 kilometres of concrete.

But a new project for Prora is set to have Nazi ideologues from Berlin to Buenos Aires spinning in their graves.

Block 2 of the complex is being redesigned as 4-star luxury holiday apartments complete with underfloor heating, parquet floors and flat screen TVs.

Guests will have access to a spa, hot baths and a fitness studio.

According to the plans, one of the apartments, with a living area of 350 square meters, will be “the biggest penthouse in Rügen.”

The first 48 apartments will be ready in October, reports travelbook.de, and 130 of the 150 apartments have already been sold.

A tower of Babel

Ever since its construction in 1936 Prora has never been completed and never fully used.

Its original cost (around a billion euros in today's money) proved burdensome to its Nazi architects and the sheer size meant that by the time war broke out in 1939 only eight buildings had been erected. And even they were uninhabitable concrete shells.

As the Nazis spread their war through Europe they diverted funds elsewhere and the buildings remained empty. In 1943 a part of the south bloc was done up to provide living space for evacuees from Hamburg. As tide of war continued to run against Germany refugees from the east joined them.

When the Soviets took over eastern Germany in 1945, and with it Rügen, they continued to use Prora to house refugees, as well as placing Germans there whose land had been confiscated in the rest of the German Democratic Republic (GDR).

In the 1950s access to Prora was shut off to the public and part of it it was turned into a military barracks. 10,000 soldiers from the “National People's Army“ were quartered there.

After the collapse of the Eastern Bloc and the reunification of Germany, the building fell into disrepair and ruin.

Various groups fought over whether it should be turned into a museum or whether its location was to good for it not to be renovated as holiday homes.

In the mid-nineties a museum about the building's dark past was opened but it closed down again a decade later.

In 2011 a youth hostel was opened in Block 5 providing 405 beds in 96 rooms. From here curious visitors can take a tour of the monstrous buildings through the „Prora Centre“ project.

But that means that six of the giant blocs still lie derelict.

Some might say there is no more fitting testimony to the hubris of the Nazi regime – that the tower of Babel neither they nor 70 years of successors could finish – still lies mostly empty.