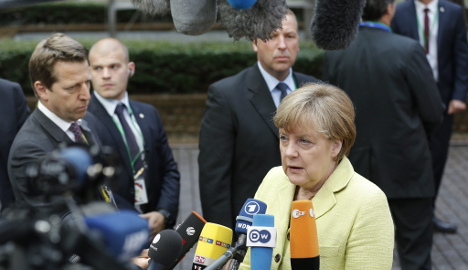 Angela Merkel faces a battery of microphones and cameras at a eurozone summit in Brussels on June 22nd. Photo: DPA

“No more billions for the greedy Greeks” or “Merkel shoots down new proposals from Athens”: these are just a couple of the bold headlines Germans have digested with their morning coffee in recent months.

In a country still massively reliant on traditional forms of media – newspapers, and above all television – for its news, these headlines matter.

In a 2015 survey, Reuters found that the country's biggest online news source, Spiegel Online reaches just 16 percent of the population – despite 89 percent of people having access to fast internet.

That's largely down to Germany's ageing population, with older people sticking to the familiar, tried-and-true news sources they've lived with all their lives rather than leaping into the strange new world of online news.

And that older public likes being told what it thinks it already knows.

“There's a lot of neoliberalism in the press in terms of economic reporting, and there's little on the other side of the argument,” Professor Wolfgang Mühl-Benninghaus of the Institute for Media Studies at Berlin's Humboldt University told The Local.

Political discussion on TV is dominated by talk shows such as Anne Will, Günther Jauch and Hart aber Fair (Hard but Fair), where although people outside the mainstream may be invited, “counter-opinions are generally squashed or have little chance of piercing through,” Mühl-Benninghaus pointed out.

This leads to a perverse effect, where people with political opinions outside the narrow mainstream are turned off not just from media, but from politics altogether.

“This type of reporting, its one-dimensionality, leads to the fact that we have fewer and fewer people who vote, because they see no alternative. Their positions aren't represented in the media,” said the media professor.

While Germany can boast much higher electoral participation than some of its European neighbours, democratic involvement has slipped significantly since the high point of the early 1970s, when more than 90 percent of people voted in general elections.

And many of those who switch off the TV, stop buying print papers and neglect to vote are the young, for whom “politicians are difficult to tell apart,” Mühl-Benninghaus said.

In fact, Gabriel, who one might expect to adopt a softer tone, sounded like he was trying to out-tough his conservative coalition partners in bringing Greece to heel.

German politicians do their best to play to the “common self-perception among the media and the big-selling papers – Germany as a financially responsible, economically powerful country,” Mühl-Benninghaus noted. Merkel is an especially cautious politician, often waiting for a consensus to form in public debate before daring to express herself on any given subject.

But the result is a self-reinforcing cycle where 'acceptable' opinion is squeezed into a tighter and tighter box and increasing numbers, especially those who think differently, are squeezed out of politics altogether – or at least outside the democratic process.

“But when you ask them why, they respond 'why should we read that?' There's a real lack of background information, their point of view is missing, so they feel that they don't need it. They see their interests reflected much more strongly online.”

So the upshot for Greece has been a German Chancellor anxiously listening to the petulant voices coming from the talkshow armchairs and the tabloid rage of Bild against the spendthrift Hellenic Republic. A February edition of BILD calling on MPs not to vote for a fresh bailout for Greece. Photo: Tom Barfield

Because those are the voices that will inform the largest single bloc of voters – the older people who will form the base for the next round of general elections.

That meant prescribing the same tough medicine for Greece as seemed to be working in countries like Spain, Portugal and Ireland in the years following the financial crisis.

Merkel knows what to do – and doesn't do it

But as the Süddeutsche Zeitung pointed out on Wednesday, “Angela Merkel… declared over and over again in private that the situation in Greece was unique, and not to be compared with that in Portugal or Spain.

“But nothing ever came of it, she just wasn't able to adjust her philosophy in the light of this uniqueness.”

That failure meant that “she lacked the courage for a real state-building programme just as for a grand conference on debt.”

The paper pointed out, though, that “alongside the politicians the people also bear responsibility” for what has happened.

Germans' “prejudices and hand-me-down vision of Europe” have prevented leaders from striking any kind of final deal – and will continue to hold the currency union back from creating the common institutions and political integration that are needed for it to work.

“The only way this can become a success story is if Merkel finally exhibits the flexibility and dedication that she's been rightly demanding of the Greeks for five years,” the SZ concludes.

But the only way Merkel will be able to do that is by freeing herself from the fear of the media and the German people's verdict – and on past form, that's unlikely to happen.