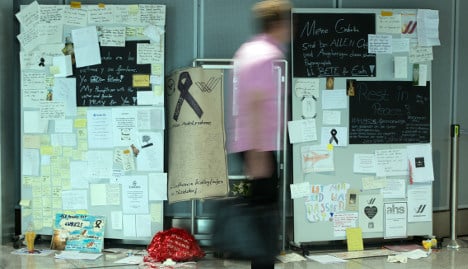 A man walks past a makeshift memorial to the Germanwings flight 4U9525 victims in Düsseldorf airport. Photo: DPA

Transport Minister Alexander Dobrindt and the Federation of the German Air Travel Industry (BDL) will present a report from a group of experts in Berlin on Tuesday.

They were asked to examine whether pilots should undergo more stringent mental health checks before being allowed to fly, and what improvements could be made to cockpit security to prevent a repeat of the tragedy.

Copilot Andreas Lubitz, who had sought medical help for mental health problems and looked up cockpit door mechanisms on his tablet computer in the days before the crash, was able to lock his captain out while he made the fatal course changes.

A much quieter, non-public event took place in Montabaur, Rheinland-Palatinate on Monday, as Lubitz' family and friends gathered in silence in his hometown to bury his remains.

The local newspaper, the Rhein-Zeitung, pointedly did not cover the burial service beyond a single line.

Meanwhile, Germanwings parent company Lufthansa told relatives of the victims to turn to the state if they hope to be awarded compensation.

According to the victim compensation law, victims of violent acts have a claim on the government for compensation, including for events in German-registered aircraft, a Lufthansa spokesman said in Frankfurt.

But victims' lawyer Christof Wellens said he “could not understand” the advice and said it showed Lufthansa was clueless about helping the victims' families, including the 15 he represents.

The airline had already offered an immediate payment of €50,000 per passenger to their families.

But victims may be entitled to further compensation from the airline depending on the law in their home countries.