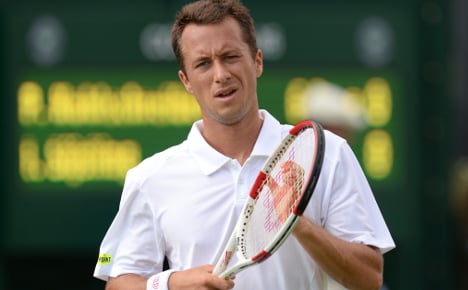 The top 32 ranked players in the men's draw have the luxury of avoiding each other in the early rounds, but no German players feature in the top category this year.

Philipp Kohlschreiber, Germany's highest ranked player, just misses out, as he places 33rd in the world.

His best performance at a Grand Slam did come at Wimbledon back in 2012, when he reached the quarter-finals, but he will have to recapture that form to have any chance of beating his first round opponent on Monday.

He will face the mammoth task of playing reigning champion and world number one Novak Djokovic. The unkind draw is the perfect example of why it is such an advantage to be seeded.

“The more senior generation of players like Kohlschreiber and Florian Meyer has simply failed to meet the high expectations.

“This is an absolute nadir in men's tennis,” editor of Tennis Magazin Tim Böseler told The Local on Friday.

“But also Kohlschreiber was unlucky to miss out on the top 32 because his ranking suffered after losing to Federer recently,” he added.

The only other two German players in the top 100 are Benjamin Becker (51) and Alexander Zverev (76).

To put this into context, other major European nations like France and Spain have a much greater pool of talent. The state of women's tennis is much healthier in Germany, with three players seeded for Wimbledon.

Kerber got to the quarter-finals last year, and could be in with a chance of going further this year.

Böseler said that the women were currently taking full advantage of receiving more funding than the men, but said that “a lot of credit for the women's success must go to captain of the Women's Fed Cup team, Barbara Rittner, who has been doing good work for years.”

Historically WImbledon has been a happy hunting ground for German players, but this era now seems a distant memory.

The only German ever to win the Ladies title in the Open era is Steffi Graf, who became champion seven times.

The last time she was crowned queen of the All England Club was in 1996, and only legend Martina Navratilova has won it more times.

This year a total of eight Germans will compete in the men's draw after Dustin Brown and Michael Berrer made it through the qualification rounds.

But it's not all doom and gloom, Böseler noted.

“There are high hopes for 18 year-old debutant Alexander Zverev, who could have a big future ahead of him,” he said.

Check out both the men's and women's draws in full here.