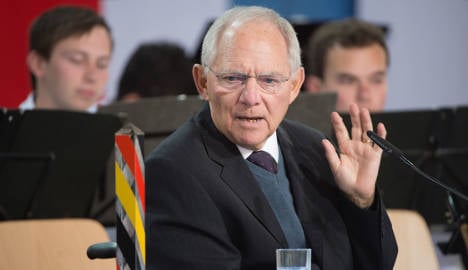 “The chances for an agreement are about 50-50,” a finance ministry spokesman confirmed Schäuble as saying at a financial conference in Frankfurt.

Merkel and Hollande had earlier said a meeting of eurozone finance ministers on Saturday would be decisive for finding a debt deal for Greece.

“We have to keep working because time is pressing and the Eurogroup on Saturday will have a decisive importance,” Merkel told a news conference early Friday at a summit of EU leaders in Brussels.

“All the leaders supported the idea that everything must be done to find a solution on Saturday.”

Talks between the finance ministers of the 19-country currency union broke down once more on Thursday, failing to produce an agreement releasing bailout funds for Greece that could be rubberstamped by leaders at the summit.

They announced that they would meet again on Saturday after further negotiations between cash-strapped Greece and its creditors.

Hollande said a deal was needed before Greece has to pay a huge IMF debt bill at the end of the month.

“I consider that the meeting on Saturday is crucial because time is up on June 30, when the Greeks must meet their payment obligations, there are national parliaments that have to meet,” Hollande said.

“We have to do everything we can and France will set itself to work so that we can have a universal and durable deal.”

EU President Donald Tusk ruled out the possibility of a special summit of eurozone leaders like the one he called on Monday in a futile bid to resolve the crisis.

The EU leaders held two hours of unscheduled talks on Greece at their summit on Thursday.
“Another Eurosummit is not foreseen. Leaders expect the Eurogroup to conclude this process at their meeting on Saturday,” he tweeted.