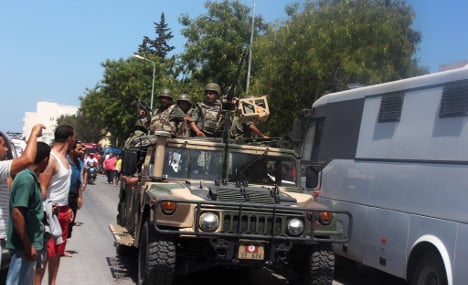 Tunisian troops patrolling the streets of Sousse in a Humvee on Friday. Photo: DPA

The attack on the beach-side resort in Sousse was carried out by armed gunmen who are suspected of having Islamist motivations.

At least 27 people died in a hail of bullets.

According to reports the attackers exchanged fire with security personnel at the resort which lies to the south-east of the capital Tunis.

One of the attackers was killed in the gun fight, while another was captured and led away by police. Citing interior ministry sources, local radio station Mosaique had earlier reported that German and British tourists were among those killed in the attack.

And tour guide Salwa al-Kadri, who was close to the scene of the attack, told dpa that several Germans were among the victims, although most were British.

“We still don't know whether Germans were among the victims,” Foreign Minister Frank-Walter Steinmeier said in a statement on Friday afternoon.

“Three weeks ago, Tunisian President Essebsi was our guest at the [G7] summit in Elmau. There, the G7 states promised Tunisia their firm support in the fight against terrorism.

“Today's attack can only strengthen us in that promise.”

The Foreign Ministry has set up a crisis unit in Berlin to organize the German response. People with relatives or loved ones in Tunisia can get in touch on the phone number 030 5000 3000.

Meanwhile, the German Embassy in Tunis is working “at high pressure” to clarify the situation, with a consular team on the way to the site of the attack, a Foreign Ministry spokesman said.

According to budget holiday company TUI, 260 Germans were staying in the vicinity of the attack. The company are trying to ascertain whether Germans were among the victims.

There are also rumours spreading on Twitter that the attack took placed on a hotel owned by TUI, which is a German company based in Hanover.

TUI said late on Friday that it would allow customers to change or cancel bookings to Tunisia up to the September 15th free of charge.

The company also said that it would arrange transport back to Germany for customers already in Tunisia.

A doctor from the local hospital has told Mosaique FM that Brits and Tunisians are among the injured, but did not mention Germans.

This attack comes only three months after an attack on the Bardo museum in Tunis in which 24 people, among them 20 tourists, lost their lives.

The Foreign Ministry could not immediately be reach for confirmation on German casualties on Friday afternoon.

Ezzedine Zerria, spokesman for the Rhine-Ruhr section of the German-Tunisian Association, said that his organization had already cancelled events planned for the summer over fears of an attack.

“There was a remaining risk that we didn't want to take,” he told Bild late on Friday afternoon.

“This is terrible, Tunisia will need years to recover from this,” Zerria continued, saying that he was “stunned and appalled”.