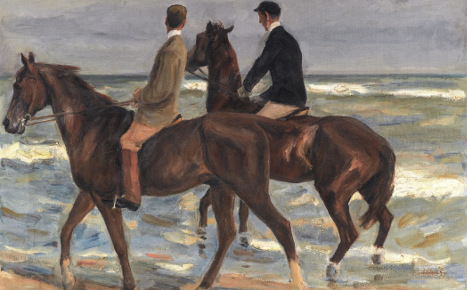 Max Liebermann's “Two Riders on a Beach” is the first piece of artwork to be auctioned off from a collection found in a 2012 police raid on the Munich apartment of Cornelius Gurlitt, son of one of Adolf Hitler's favourite art dealers.

The painting sold for nearly €2.7 million, over three times the price of €766,000 it was expected to fetch at Sotheby’s auction house in London.

The artwork was returned to the heir by Taskforce Schwabinger Kunstfund, or the Schwabinger Art Fund Task Force, in May.

The rightful heir, a New York lawyer, had even attempted to sue the Federal Republic of Germany and the state Bavaria in Washington for the art theft by the Nazis.

Before being recovered, the 1901 oil painting was inherited by Cornelius, the son of Hildebrand Gurlitt, an art dealer employed by Hitler, who died last year.

Legal wrangles erupted over the collection after Gurlitt's death, as he tried to leave the trove – including many works confiscated from Jewish families and other people targeted by the Nazis – in its entirety to the Museum of Fine Art in Bern, Switzerland.

Another heir of the painting, David Toren, now aged 90 and blind, witnessed the painting being stolen from his great-uncle David Friedmann in 1938, the day after the massive Kristallnacht (night of broken glass) action against Jewish-owned businesses, when he was 13.