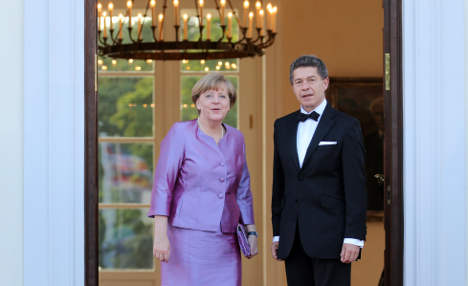 During the banquet the Queen gave a short speech highlighting the importance and benefits of cooperation between the UK and Germany. I have decided to read it as a coded appeal to the British public to stay in Europe. As it was probably written for her by the government, that may not be too far off the truth.

Observing the “profound changes” that have taken place in both countries over the 50 years since her first state visit to Germany, the Queen said “one of the irreversible changes for the better in my lifetime has been in the relationship between the United Kingdom and Germany.”

She then mentioned the abundance of war anniversaries taking place in 2015, but said that visits by British royals to Dresden and Bergen-Belsen concentration camp “underline the complete reconciliation between our countries.”

Since the war Britain has strived to be one of Germany's “very strongest” friends, the Queen said, adding that “I have every confidence that we will continue to do so in the years ahead.” [Wink wink, nudge nudge]

The British head of state also praised the intellectual cooperation she had seen between the two countries earlier in the day at the Technical University in Berlin, before returning unmistakably to the theme of Britain's future in Europe.

“We know we must work hard to maintain the benefits of the post-war world. We know that division in Europe is dangerous and that we must guard against it in the west as well as in the East of our continent,” she concluded.

So have it Farage, have it Putin, the great lady has spoken. You shall never divide us.

Earlier in the evening the guests arrived at the palace to much fanfare.

Here it is. Everything you need to know about the arrivals for the royal banquet. I spotted four people I knew and tweeted about all of them! Who was the coolest cat on the red carpet? You decide… even if it was clearly my main man Frank-Walter.

The German foreign office have a cute little video showing how the name cards for the banquet are made. Spoiler: they don't type them in Sans Serif and print them out.

Apparently it's the Queen who's holding the shin-dig up. Would've thought with all that waving she'd have worked up quite the appetite.

Crowds have thinned out a bit in comparison with earlier in the day by the look of it.

The red carpet is out in expectation of the royal arrival.

Frank Walter Steinmeier turns up and rocks the finger wag! Some say he's as dull as dish water – I disagree. Have always respected the glasses and that is a tough act to follow. Dave has just arrived. Does a little pose for the snappers

Is this the most elegant we have ever seen Frau Merkel?

There we go. Here she is in her crown. it's too magical for words. All of Germany is in tears! Or would be if any television channel was actually showing this.

Queen heard Merkel was trying to show her up in purple gown, so whipped out her crown. game. over. #QueenInBerlin pic.twitter.com/T5EWFxTOLd

That's pretty much it. Just leave you with this tragic picture of Prince Philip being ignored. Story of the poor man's life.