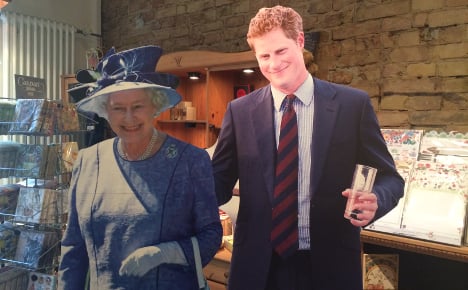 Broken English is a shop in Kreuzberg, Berlin that sells British nick-nacks, food and drink. From  Marmite to scones, and shelves and shelves of tea, this little snapshot of the British Isles has it all.

Dale Carr, who has witnessed numerous State Visits and major royal events, opened the shop 20 years ago, and business is booming as people prepare for the Queen's arrival. Previous visits by Her Maj' have attracted reasonable attention, but this time round things are different.

“I'm running out of stock to sell. This level of intensity is nothing like the visit in 2004,” Carr told The Local. “No other world leader or major figure can attract this level of attention.”

On a rainy Berlin day, strangely fitting for a visit from the British monarchy, Germans were undeterred, and came to buy supplies to help them get in the mood.

“It is hard to say why Germans are so interested, but I think the Queen has earned incredible respect as a person, after representing Britain for so long,” Carr said.

She also spoke fondly of other royals, describing Prince Charles as “a maligned and misunderstood pioneer”, and Prince William as “the perfect future king.”

“The only day I have closed the shop, apart from Sundays, was when Diana died in 1997,” she added. One German customer, who was purchasing the classic combination of scones, clotted cream and jam, said she was against the idea of monarchy, but that she just enjoyed the sense of pomp and ceremony.

“It is particularly interesting because realistically this could be the last visit for the Queen,” she said.

Whether the Germans see the British as sophisticated or simply eccentric, there is a definitive demand for all things from “der Insel”. Carr has lived in the German capital for over 30 years, and she spoke very highly of the city and its people.

“I have always felt very welcome as a British person here, especially in recent years,” she said.

“Opening this shop changed my life, because it gave me a connection to my adopted country.”

She has become somewhat of a celebrity over the last week, as various elements of the German media have been keen to talk to her, including TV broadcasters ZDF, for whom she will do a live broadcast on Wednesday.

Check out how you can catch a glimpse of Her Majesty in the flesh in Germany this week.