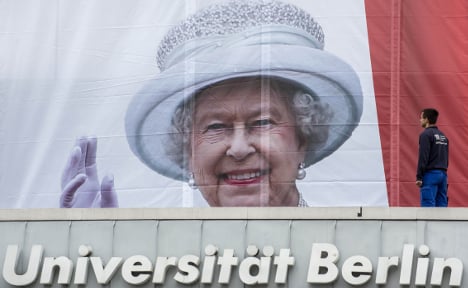 It will be the royal couple's fifth state visit to Germany, and comes exactly 50 years after Elizabeth's first. The 88 year-old monarch made previous state visits to the country of her Hanoverian ancestors in 1965, 1978, 1992, and 2004.

Wednesday June 24th – Berlin: The banks of the Spree, between Bellevue and the Reichstag The Queen, President Joachim Gauck, and the Duke of Edinburgh will take a tranquil riverboat trip along the river Spree starting at 11:15am.

This will start adjacent to Gauck's residence, Bellevue Palace, and then travel east, past the Chancellery, Hauptbahnhof, and towards the Reichstag.

The northern banks of the Spree will be accessible to the public on the entire stretch, so hardcore royalists will be able to follow the boat along its route.

The southern banks of the Spree will be accessible around the House of World Cultures cafe terrace, the upper level of Spreebogenpark (opposite Hauptbahnhof), and between the Reichstag and Marschallbrücke. It isn’t just Berliners who will be treated to a royal visit, as Gauck will also guide the Queen and the Duke of Edinburgh on a tour of Frankfurt.

They will arrive outside the Paulskirche around 11.45am and listen to a short choral performance.

At around 12.30pm, they will walk from the Paulskirche to the Römer (city hall), and then at around 2.30pm they will appear on the balcony of the Römer, before walking through the square.

Large areas of Paulsplatz and Römerberg will be accessible to the public, so get down there!

The State Visit will return to the capital on Friday, when the Queen and the Duke of Edinburgh will leave the Adlon hotel at around 9.45am for a brief walkabout in Pariser Platz.

The square will be open to the public but access will be controlled through checkpoints at both the Brandenburg Gate end and the Unter den Linden end.

There is a limit on how many people can enter the square, and once it is full the police will close the entry points.  So if you want to secure yourself a space, arrive early!