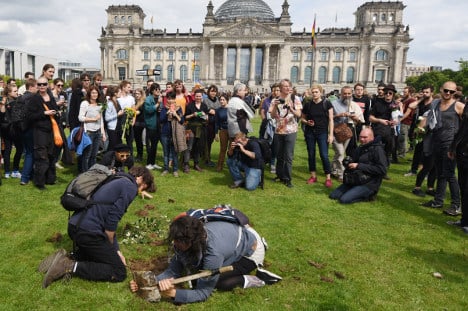 Protesters digging symbolic 'graves' in front of the Bundestag on Sunday. Photo:DPA

The political art group calling itself “Centre for Political Beauty” had planned to march to Chancellor Angela Merkel's offices with what it said were the corpses of dead migrants and bury them outside.

After the Berlin authorities barred them from carrying out the plan, they knocked down security barriers in front of the nearby Reichstag parliament building.

There they used shovels to dig dozens of small plots and planted wooden crosses in the grass emblazoned with slogans such as “Borders Kill” and “Fortresses Fall”.

They carried three caskets with them, but there were no bodies inside, a police spokesman told AFP.

Most demonstrators then complied with a police order to clear the area, but a “small number” of people were detained for disturbing the peace.

Activists from the group had staged a Berlin funeral on Friday for a Syrian refugee who they said died in the Mediterranean and whose body had been in cold storage in Sicily, Italy for the past six weeks.

It followed a similar burial at a Muslim cemetery in the German capital earlier in the week.

Critics say the group's project – which uses the slogan “The Dead Are Coming” – is macabre, tasteless and crosses ethical lines, but the organizers argue that it is casting the spotlight on an inhumane system.

Some 800 migrants died in a shipwreck in April, the worst disaster yet in the Mediterranean in a year in which an estimated total of 1,800 people have perished while trying to cross to Europe from Africa and the Middle East on flimsy boats.