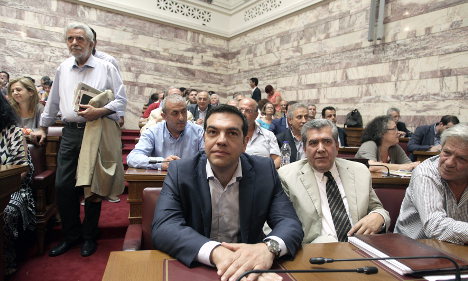 YouGov found that 58 percent of people would prefer it if Greece simply left the Euro.

Just 28 percent of Germans thought that Greece should remain in, while 14 percent had no opinion.

That's a sharp turn from May's results, when 50 percent of people thought Grexit was unlikely and just 39 percent expected it to happen.

The poll results were released as Europe girds itself for a last-ditch round of negotiations between Eurogroup finance ministers in Luxembourg on Thursday and Friday.

If they are able to make any progress, there may be an emergency meeting of heads of state and government, including Chancellor Angela Merkel, over the weekend, diplomats in Brussels said.

Merkel herself has publicly refused to give up hope of a solution – although she admitted on Tuesday that “a decision can only be reached [at the finance ministers' meeting] if there is a collective suggestion from the three institutions with Greece”.

Greek Prime Minister Alexis Tsipras said on Tuesday that he was willing to return to the table following failed negotiations last weekend.

But he spurned any continuation of austerity politics, while Greek finance minister Yanis Varoufakis said that the demands of Greece's creditors were a humiliation for the Greek people.

“My fear is that the Greek government will gamble for long enough that its own economy will be doing so badly that there's no way of avoiding bankruptcy,” German Institute for Economic Research (DIW) president Marcel Fratzscher told Focus Online.

Meanwhile, a majority of Greeks want to remain part of the eurozone at almost any cost.

Polling institute GPO found that 69.7 percent of respondents wanted to stay in the Euro, even if it meant more tough public spending cuts.