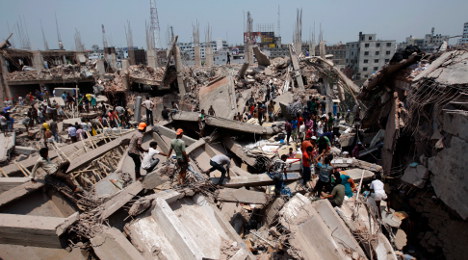 People clamber through the ruins of the Rana Plaza factory. Photo: DPA

The missing cash, amounting to around €5 million, should have been part of a fund to which German companies were encouraged to donate after criticism by rights groups of their turning a blind eye to work conditions along their supply chain.

The revelation was made by Reiner Hoffmann, head of the Confederation of German Trade Unions (DGB) in comments reported by N-tv.

On April 24th 2013 the Rana Plaza building in Dhaka collapsed, killing a total of 1,129 workers. The clothes made at the factory were aimed at a western market and were bought by companies including Primark and Walmart.

This uncomfortable news comes days after Angela Merkel explicitly referenced the tragedy in Bangladesh in an opinion article for the Frankfurter Allgemeine Zeitung arguing for the value of the G7.

At the G7 summit in Elmau, Bavaria, which kicks off on Sunday, the Chancellor said that work conditions in the developing world would be a central point of discussion.

In March the missing funds stood at around €8 million. After a personal appeal by the Chancellor some companies contributed to the fund, but not enough to cover the whole remaining sum.

“This shows that the principle of voluntary donation isn’t working,” said Hoffmann, calling for a fund to which companies contributed based on their involvement in the production of certain products.

“Most products that we buy haven’t been ‘Made in Europe’ for a long time. And the production has far too often been based on the principle of the lowest wages, the lowest costs and the worst work conditions.”

Companies need to take responsibility for work conditions all along the production chain in the textile industry and “in all other products, whether it be smartphones, cars or children’s toys,” said the union boss.

Hoffmann also called for standards to be enshrined in law.

“We have had the same experience with the OECD guidelines for multinationals.”

The OECD had created a set of rules for the individual member states “but this set of rules is not legally binding. We need to re-evaluate the national contact points at which one aims complaints.”

“I recognise that the Chancellor is putting this issue on the agenda. But G7 must not be an alibi for inaction. This issue must be continuously addressed at the G7 and also at the G20,” said Hoffmann.