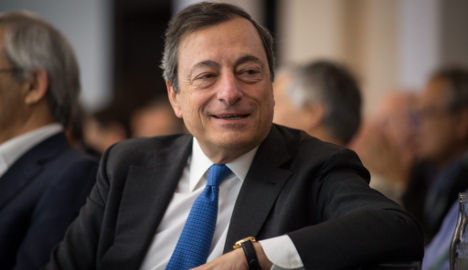 There is still “work to be done,” Pierre Moscovici told French radio after emergency negotiations in Berlin joined unexpectedly by the heads of the International Monetary Fund and the European Central Bank.

The aim was to come up with “a final proposal” to present to Athens, according to German daily Die Welt.

But Merkel's office said after the meeting only that the quintet agreed to work together “intensely” in the coming days and would stay in “close contact”.

“These discussions are starting to bear fruit,” said an optimistic Moscovici.

“There is a solid basis to progress but we're not there yet” and “there are efforts to be made on both sides to get there,” he admitted.

He stressed that he “ardently wanted Greece to stay in the eurozone” but that “time was pressing.”

The country faces a key deadline on Friday when it is due to repay 300 million euros to the IMF. There are fears Greece does not have the necessary funds and will default, possibly setting off a chain of events that could end with a messy exit from the euro.

Die Welt, citing sources close to the talks, said they began at 1930 GMT and Greek Prime Minister Alexis Tsipras was in Athens “awaiting a phone call from the troika” of the EU, IMF and ECB.

According to a diplomatic source, the group did not telephone the Greek premier during the meeting.

Greece remains locked in tough negotiations with international creditors in a bid to release €7.2 billion in remaining bailout funds.

A deal has so far proved elusive as its creditors in Europe and the IMF push for greater reforms in return for the cash, which Greece's anti-austerity government has refused to match.

Merkel, Hollande and Juncker met for scheduled talks earlier Monday but the evening arrivals of Lagarde and Draghi came as a surprise.

They are in Germany for G7 meetings this week, at which the Greek crisis is featuring prominently. The United States and Japan have pressed Europe to resolve the crisis for the global economy's sake.

The impromptu gathering followed a phone conference Sunday between Merkel, Hollande, Juncker and Tsipras, which Merkel's spokeswoman described as “constructive”.

But in a column published by French newspaper Le Monde on Sunday, Tsipras said his government was not to blame for the impasse.

“It is due to the insistence of certain institutional actors on submitting absurd proposals and displaying a total indifference to the recent democratic choice of the Greek people,” he wrote.

Lagarde caused a stir last week by citing the “potential” of Greece leaving the 19-nation eurozone but ahead of the Berlin meeting, Juncker stressed that a “Grexit” would be bad for the entire bloc.

“I don't share this idea that we'd have fewer concerns and constraints if Greece gave up the euro,” he told the Sueddeutsche Zeitung.

Tsipras said his government has made concessions, including agreeing to implement a series of privatisations it had previously opposed.

It has also agreed to reform its value-added tax system as well as the pension system.

Rather than imposing further austerity that has so far only served to drive Greece into a deeper recession, he said his government has also submitted proposals to raise revenues.

Tsipras warned that Europe was at a crossroads, and could choose between a strategy of greater integration or one of division.

Those seeking the second strategy are simply seeking to inflict harsh punishment and mandatory austerity, with “Greece being the first victim”, he said.

“To some, this represents a golden opportunity to make an example out of Greece for other countries that might be thinking of not following this new line of discipline,” he wrote.