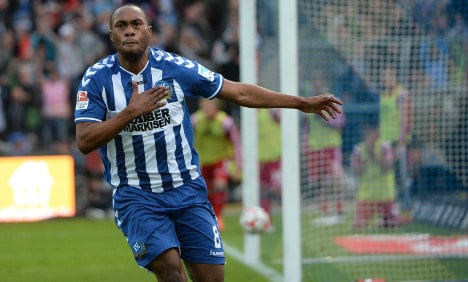 Hamburg are the only Bundesliga team never to have been relegated. Photo: DPA

Hamburg avoided a first relegation from Germany's top flight with a dramatic 2-1 extra-time win at Karlsruhe in Monday's relegation play-off, second-leg, to seal a 3-2 aggregate win.

Replacement Nicolai Müller scored Hamburg's winner in the 115th minute, but Germany goalkeeper Rene Adler was Hamburg's hero by saving a penalty by Karlsruhe's Rouwen Hennings in the 123rd minute.

Adler's save means Hamburg win the relegation play-off for the second year running and sealed the come-back win.

It also meant Hamburg retained their status as the only team never to have been relegated from the Bundesliga.

After a 1-1 draw in last Thursday's first-leg in Hamburg, Karlsruhe had taken the lead at their sold-out Wildpark stadium when replacement Reinhold Yabo scored a 78th-minute goal.

But Hamburg fought back and with time running out Chile international Marcelo Diaz claimed a dramatic equaliser in the 91st-minute to force extra-time.

Müller came off the bench to break Karlsruhe hearts when he tapped home Brazilian defender Cleber's final pass for the winner which left Karlsruhe needing to score twice because of the away goals.

There was still time for more drama when referee Manuel Graefe pointed to the spot for a dubious penalty after judging Hamburg defender Johan Djourou had touched the ball.

But Hennings, the second-division's top-scorer, was left with his head in his hands as Adler pushed his spot-kick onto the post.

It denied Karlsruhe a return to the Bundesliga for the first time since their relegation in 2009 and they miss out on a spot in Germany's top flight alongside second division champions Ingolstadt and runners-up Darmstadt, who were both promoted.

Hamburg are the only club to have been in the top flight in every season since the Bundesliga began in 1963, but needed to beat Greuther Fuerth on away goals in a play-off to stay up last season.

Current coach Bruno Labbadia is the fourth trainer to take the helm this season, which saw them finish 16th in the table, while Freiburg and Paderborn are relegated.