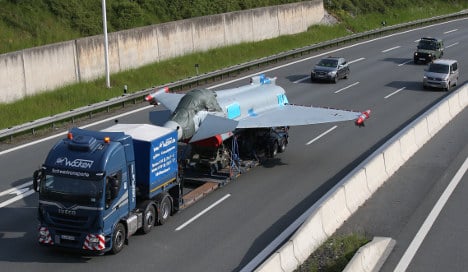 A Eurofighter jet stopped up traffic on Thursday because it was so wide. Photo: DPA.

The supersonic fighter jet's wingspan of more than eleven meters was so large that other cars could not overtake it along the A9 autobahn.

And the truck hauling the plane along the autobahn could only travel at between 50 and 60 kilometers per hour due to the heavy load.

The driver stopped again and again at wider points in the road to try to let others pass.

“You can't just slide right through with things like this,” said a police spokesman. “Then we would be annoying the other drivers.”

But the plane was still too wide, drawing the ire of fellow drivers as it continued to obstruct the flow of traffic.

Locals tried to advise the police of alternative routes off the main road.

The plane was on its way to being repaired at an Airbus plant in Manching in Upper Bavaria.

According to an Airbus spokesperson, the fighter jet had been damaged in a collision with a civilian aircraft in June of last year that killed the two people in the other plane.