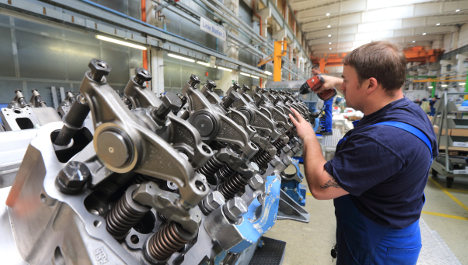 A worker assembling motors at a Magdeburg factory. Photo: DPA

They found that 21 percent of managers named Germany among their top three countries to invest in – an increase of three percentage points over 2014.

While Germany is still well behind China and the US, who scored 38 and 35 respectively, it leads competitors including India (18 points), Brazil (14 points) and Russia (11 points).

In all, 65 percent of investors said that they were “happy” with German government policy.

“Years-long economic and social reforms have made Germany as a business location more resilient and flexible and increased its competitiveness,” the authors write.

“Workers are among the best-trained in the world and the quality of products made or designed in Germany traditionally has a fantastic reputation.”

Investors rated Germany highly for its transport infrastructure, workers' skill levels, the social climate, and transparency and stability in the political and justice systems.

But the investors are keen to add that the country can't rest on its laurels.

“Labour is too expensive, business taxes are too high, and labour law is too inflexible,” the authors sum up.

On a comparison between different western European countries 42 percent of the survey respondents named Germany the “most attractive” country for foreign investment.

That score puts the UK, at 18 points, and France, at 12 points, thoroughly in the shade.

And when investors were asked to name the most important competitor country for Germany, just 11 percent named the UK – a fall of seven points compared with last year.

Despite all its image problems, the UK racked up more total foreign investment projects in 2014, at 887 compared with Germany's 763, but Germany and France were hot on its heels.

That's likely because of US firms' preference for investing in a country with the same language and cultural background.

Around 30 percent of US investments in Europe came into the UK, compared with just 14 percent for Germany.

“If you leave out US investors, the total number of investment projects in Great Britain was 565 in 2014,” the authors found.

“Germany's second place this year is mostly due to the huge weight of the US as an investor in Europe and the above-average engagement of American investors in the UK.”

Asked about the near future, 54 percent of the investors polled said that Germany's attractiveness would improve – although just 6 percent said it would be “significantly” improved.

Only nine percent thought that the country would become less attractive.

“A year ago, not even half of respondents were this optimistic,” the authors write.

“The environment is totally positive: many German companies are reporting record profits, tax income is rising, unemployment is the lowest it's been since reunification – many companies even have problems filling their open positions.”

The sunnier outlook for Germany is linked to expectations of more improvement in the European economy.

Almost 60 percent of investors thought the continent would become more attractive in the coming years, a boost of five points compared with 2014.

“Investors think the trough of the Euro crisis is behind us,” the authors write. “They believe there's fresh wind in the 'old' continent's sails – trust in Europe is growing.”