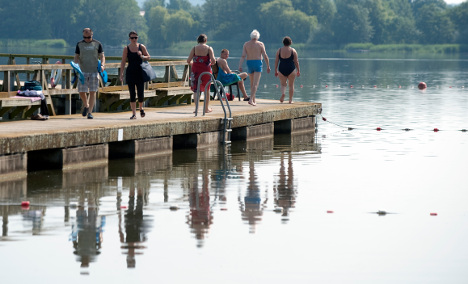 In the litany of fisherman's yarns, this one will surely rank up there with some of the most far fetched.

When a group of anglers pulled up their net expecting to find a trout or carp inside, to their astonishment their catch turned out to be a Second World War shell, reports NDR.

The police later reported that six subsequent pieces of metal were found in the water of southern Lower Saxony's largest lake, all suspected to be shells.

Later in the evening, the Service for the Securing of Armaments discovered a yet another shell in the water.

Whether this means that the normally popular swimming spot is should now be considered more dangerous is unclear.

Local mayor Arne Behre said that the authorities were taking precautionary measures, but he was not assuming that there was an “acute risk”.

Speaking of shells, a fisherman from northern Bavaria may have a hard time convincing his friends of a catch he made on Sunday.

It took him a total of 40 minutes to reel in what he thought was a particularly feisty carp. But when he finally landed the beast, he discovered it was a snapping turtle – a species indigenous to North America. The man's hook got caught around the turtles leg, reports SWP, which said that the 70cm-long creature suffered no serious injury.

Although it is illegal to possess or sell these aggressive animals in Germany, this is not the first one that has been caught in the country in recent years. In 2014, a snapping turtle was pulled out of the Spree, the river that flows through Berlin.