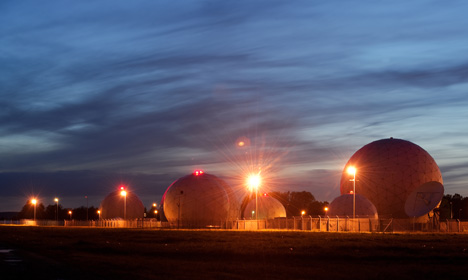 Surveillance of information in Pakistan was reportedly carried out from a BND facility in Bad Aibling. Photo: DPA

The BND spy service provided a tip-off that bin Laden was hiding in Pakistan, with the knowledge of Pakistani security services, according to a report in the Bild am Sonntag newspaper. The article was published as the agency is battling heavy criticism in a spy scandal.

The information came from a BND informant within Pakistan's Inter-Services Intelligence agency and confirmed CIA suspicions, said the report, which cited unnamed US intelligence sources.

The American source was quoted as saying the German tip-off was of “fundamental importance” in the hunt for the architect of the September 11, 2001 attacks.

Pakistan has denied that it knew bin Laden was living within its borders or that it had advance knowledge of the 2011 US special forces operation which killed him in a walled compound in the city of Abbottabad.

The German newspaper said that ultimately US services tracked down bin Laden's exact location by following one of his couriers, as Washington has said.

The report also said the BND used its Bad Aibling listening post in Germany's southern Bavaria state to monitor telephone and email traffic in northern Pakistan to ensure the secrecy of the planned US Navy SEALS' operation.

News portal Spiegel Online pointed out that the newspaper report about the German spy agency's “apparent act of heroism” was published “right in the middle of the BND affair” and asked “is it plausible?”

The BND has been accused of helping the US National Security Agency (NSA) spy not just on extremists and criminals but also on political and business targets, including the French government, the European Commission and the Airbus Group.

The claims — and questions of how much Chancellor Angela Merkel’s office knew about the reported joint snooping — have occupied German politics and media for weeks, and are subject to two parliamentary inquiries.

Merkel has pledged to testify before the panels if asked, while her Social Democratic vice-chancellor, Sigmar Gabriel, has heaped pressure on her, demanding her office reveal the search terms for electronic surveillance that the NSA gave to the BND over the years.

On Sunday, Gabriel demanded Merkel's government show “backbone” and release the classified list of search terms even if Washington objects to their publication.

His party has also charged that Merkel's conservatives deceived the electorate by voicing unrealistic hopes for a US-German “no-spy agreement” in the lead-up to 2013 elections.

Meanwhile, Justice Minister Heiko Maas has demanded reforms to boost political oversight over the spy agency, telling the Welt am Sonntag newspaper that “we need to make all of the BND's activities subject to democratic controls”.