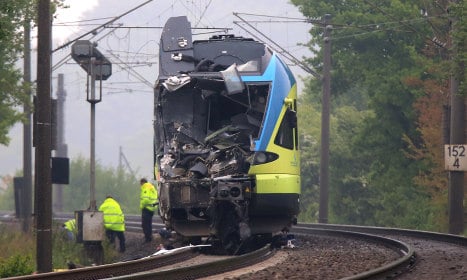 The impact of the collision tore off the front of the train. Marcel Kusch/dpa (c) dpa - Bildfunk

The accident happened near the town of Ibbenbüren when the train, from Osnabrück, hit the lorry carrying manure, officials added.

Early reports suggested the vehicle had got stuck while trying to drive across the railway line, police said.

At least three of those injured were said to be in a serious condition.

Emergency services are at the scene, police said, and details are still coming in.

Ibbenbüren is west of Osnabrück, in the state of North Rhine-Westphalia.

“The train was very crowded,” he said.

He added that the lorry driver had not been injured.