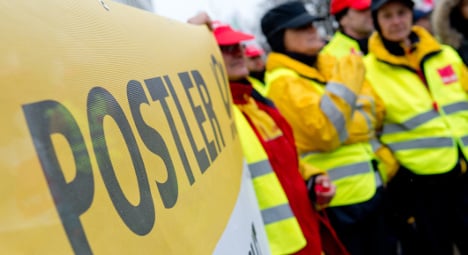 Postal workers on strike in April outside a branch in Munich. Photo: DPA

Verdi has already been in touch with Vice-Chancellor and Economy Minister Sigmar Gabriel, who called on Post chairman Frank Appel to respond to the allegations, the Süddeutsche Zeitung (SZ) reported on Wednesday.

Based on phone calls, minutes and notes taken by those affected, Verdi says that one of its members was told that “higher-ups” were watching who walked out on strike “and would be looking closely at the contracts of people in temporary posts”.

In one depot, a manager held one-on-one conversations with all the people on fixed-term contracts working under him who were taking part in a strike.

“Some were totally intimidated and told me that they wouldn't be taking part in any more strikes,” one union organizer said.

In a letter to Appel on May 4th, Gabriel appears to accept the accusations fully, saying that “apparently managers used pressure to turn Verdi members against their union”.

All employers, “especially large firms partly owned by the federal government,” should “be expected to respect individual and collective employee rights without reservation,” he wrote.

Spokespeople for the Post told SZ in a statement that “putting pressure on Verdi members is not what we understand by leadership and communications”.

But it added that “it's obvious that our managers explain the firm's understanding of how competitive wages are necessary and discuss it with employees”.

Verdi has called Post workers out on strikes in a battle over wages, working hours, and the Post's plans to outsource some package deliveries.