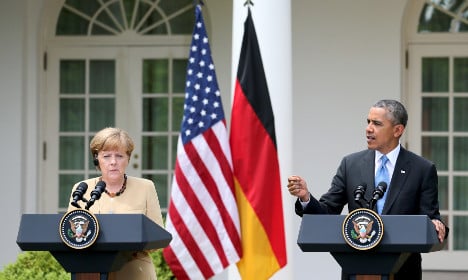 The public in both cuntries still trust in the U.S.-German alliance. Photo:DPA

Despite the stormy waters that have been blown up by the NSA and BND affairs in recent years and months, the German-US relationship seems to have weathered the storm with surprising durability.

Americans have more faith in Germany as a reliable ally than Germans do in the US, though most Germans still had positive outlooks. The study showed that 72 percent of American respondents said Germany was a reliable partner, while 62 percent of Germans called the US reliable.

But views over the role of history in the German-US relationship vary widely across within the two countries. While 47 percent of Americans believed that the Second World War and the Holocaust were the defining moments in the relationship, only 20 percent of Germans agreed.

Germans are much more likely to see the fall the Berlin Wall as the epochal point that defined what the two countries meant to each other at 34 percent of German respondents compared to 28 percent in the US.

Twenty percent of Germans meanwhile also saw the Marshall Plan – the programme of American financial aid to Germany after the Second World War – as the key historical event. In comparison, only three percent of American respondents said the same of the plan.

Meanwhile the older an American was, the more likely he was to trust Germany. Seventy-seven percent of over 65s said they trusted German, whereas 66 percent of those between 18 and 29 were prepared to agree to this statement.

In Germany the baby boomer generation were most likely to have a sympathetic view of their partners from over the pond with 66 percent seeing the USA as reliable.

In terms of views on Germany's role in the world, Americans are far more keen to see Germany take on increased military responsibility. Fifty-four percent of those asked said they would like to see the German army become more active in the world.

Germans still clearly bear the burden of their own history more heavily. Only 25 percent said they wanted to see their government do more militarily.

Americans were also sharply critical of German policy towards Russia. Fifty-nine percent of them said Germany and the EU isn't tough enough in how it has dealt with Russia during the Ukraine crisis, while 22 percent said Germany was getting its policy towards Moscow “about right”.

One the other hand more Germans (27 percent) thought the U.S.'s policy towards Russia was too tough, compared to those who said it was not tough enough (23 percent).

As for relations with other major Western powers – the UK and France – perceptions in the two countries were noticeably different on the reliability of the two.

Americans on the other hand felt totally comfortable with their “special relationship” with the UK – 85 percent said they saw Britain as reliable. – Americans were somewhat less trusting of the French, with 69 percent saying France was a reliable ally.