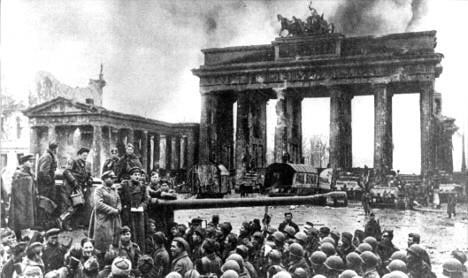 Germans no longer necessarily see the end of the war as a liberation. Photo: DPA

A fiercely patriotic Russian biker gang has ridden across Russia and Germany, in emulation of the Soviets' march to victory in 1945 and will commemorate the Soviet victory over fascism with a parade around Berlin.

The German foreign office tried to annul the The Night Wolves' visas, citing the political nature of such commemorative acts, to no avail. The wider German public were also offended. I find this reaction bewildering: May 8 has always been complex in Germany, yet to see the narrative of a victory over fascism as offensive feels like a throwback to the political memory battles of the post-war years.

For East Germany, formally the German Democratic Republic (GDR), May 8 was always a day of overblown governmental parades, thanks to the Soviet liberators. But West Germans – initially at least – remembered the end of the war as a moment of defeat and expulsion. The Soviets, or Russians, were remembered as an “Asiatic” menace that had ushered in the true catastrophe of World War II: its violent end.

Only a generational change in West Germany from the late-1960s challenged that view, though it never fully disappeared. The reappearance of an anti-Russian discourse has yet again brought to the fore the intricacies of remembering Nazism, the war, and its end in Germany.

The complexities of German public memory have their origins in the intricacy of the the end of the war. That big date – May 8 1945 – was experienced differently throughout Germany and its occupied territories.

In the town Monschau, in the Eifel region, the war ended in September 1944. The Americans took the town without any resistance and for the rest of the war the good people of Monschau went about rebuilding a postwar society. So May 8 made no real difference to the northern Eifel region.

Other areas, by contrast, witnessed ferocious fighting right up until and even after 8 May 1945. The Dutch island of Texel, about 50km north of Amsterdam, played host to absurd fights between German soldiers and Georgian auxiliaries until May 20.

The Silesian city of Breslau/Wrocław lived up to its name – Festung Breslau (fortress Breslau) – with fierce fighting until May 6. Berlin was torn to bits in the final months of the war with widespread civilian casualties and victims of sexual violence.

So no decisive day here. And even once the fighting had stopped the war continued for many Germans. Expulsions, local violence, expropriation as well as coping with the devastation of German towns and cities meant that May 8 remained a contentious and complex date in Germany history.

Nevertheless, decades of introspection, painful (and almost tortured) self-criticism, and expositions of the “sins of the fathers” transformed the German public sphere – especially since reunification – into a forum for critical memory.

It has become commonplace to hold up German commemoration of the war as a standard-bearer for other societies to follow: mature, self-critical, open. What other society would dedicate a large chunk or prime real estate in the centre of their capital to remind themselves of their own crimes?

Yet some very obvious cracks are beginning to emerge. The current vein of anti-Russian feeling throughout Europe has certainly had an effect on commemoration in Germany. Many now think it fair to write the Russian victory out of the memory of World War II.

Rather than foregrounding German responsibility, public discussion has focused on Russian connivance in abusing history. And in September last year President Joachim von Gauck used his speech in Gdańsk on the 70th anniversary of the German attack on Poland to warn of contemporary Russian aggression.

Yes, this could be a belated reaction to 40 years of wooden Soviet war remembrance in the former GDR. But there is evidence that this is a broader challenge to the established memory morals of German public discourse.

Last summer, at the height of the Gaza conflict, I witnessed four teenagers waving a Palestinian flag on top of one of the stone pillars of the Holocaust Memorial in Berlin. They were chased away by two security guards. They also happened to have an “immigrant background”, to use the German word (Migrationshintergrund).

This blurring of current events with the Holocaust was also seen during last year’s spike in anti-Semitic incidents, when some muddled up global political issues with the history and memory of the Holocaust.

The moral grammar surrounding the Holocaust, the war, and its end has been an absolute certainty for at least three decades, embedded into the education system. Yet this concept of Vergangenheitsbewältigung (critical engagement with the past) – in part borne out of the History Workshop movement of the late-70s and 1980s – assumed a common social relationship to the German past.

And now there have been suggestions that the memory culture of German responsibility is beginning to unravel in the education system, especially among young people with an immigrant background.

A poll from 2010 for example, published in the German newspaper Die Zeit, highlighted ambiguous German-Turkish attitudes towards the Holocaust. Around half of the respondents felt Holocaust memory should be a central issue for all Germans, yet 68% also admitted to knowing little about the Nazi past.

And the Federal Agency for Civic Education has documented a growing trend among school children with an immigrant background to link the Holocaust to Middle Eastern politics, which also leads to a rejection of the relationship between Jewish victims and German responsibility.

German Green politicians Cem Özdemir and Sven Christian Kindler have also highlighted the connection between a rejection of Holocaust memory and present-day politics. And similar developments are also happening in France, as Mark Lilla recently pointed out.

Of course this is also part of a general “Holocaust fatigue”, yet the underlying politics of it all is worrying. In a climate in which memory is being re-politicised, politicians would do well to heed these telltale signs of a growing challenge to German moral memory.

By James Koranyi, Lecturer in History at Durham University

This article originally appeared in theconversation.com