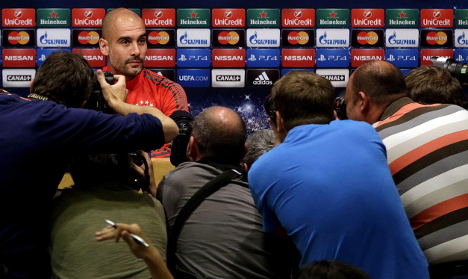 The eyes of the world on the former Barca coach. Photo: DPA

He joined the world renowned La Masia youth academy aged 13, and has spent more years of his life at the club than elsewhere.

"This is my home. Barcelona was an important part of my life, it was everything, but now I am here to win" said Guardiola with a steely focus at the pre-match press conference.

As manager from 2008-2012 he built arguably the greatest club side in the history of football, passing teams to death and winning title after title along the way.

Ever since he has tried to bring his trademark style of "tikki-takka" football to Munich, with mixed results. Two German league titles in a row may seem impressive but European prestige is what the German giants crave.

Guardiola is one step away from the final, but in his way stands his former club, who are entering a new era, and destroying almost every team in their wake.

"It's impossible to simply defend here, you need to keep possession." said Guardiola.

The new Barcelona place less focus on ball possession but boast greater attacking firepower. The forward trio of Lionel Messi, Neymar and Luis Suarez have scored over 100 goals between them this season and would strike fear into any defence in Europe.

Barca have won their last two matches 6-0 and 8-0, so Bayern will have to defend brilliantly to stand a chance.

Guardiola has admitted that "There is not a system or coach to stop talent of Messi's magnitude."

"The way he has been playing over the past four or five months, you cannot stop him. He is too good," he said.

Messi, who has scored 51 goals and contributed 27 assists this season already, himself offered some nice words about his former mentor:  "He was with us for a long time and we had the luck to win many titles and experience important moments. He is a coach that studies everything," he said.

Robert Lewandowski, who broke his nose and upper jaw in the German Cup semi-final defeat to Borussia Dortmund last week looks set to play with a face mask. "Ready for the next challenge!" he tweeted on Sunday.

Lewandowski could be key for Bayern, who will need a strong figure to hold up the ball and allow his team mates to move up the pitch.

It will be fascinating to see how the match develops between two teams who almost always dominate ball possession and overwhelm their opponents. Whoever manages to win the battle for the ball and hold it is likely to progress.

Bayern may be underdogs but still have enormous quality, despite their injury crisis. The recent returns of Philipp Lahm and Bastian Schweinsteiger give the team the kind of experience needed for such a daunting challenge.

One of their form players is another product of the Barcelona youth system. Thiago Alcántara made the switch along with Guardiola in 2013, and has been very impressive in recent months.

At this stage last season Guardiola's first attempt to bring the Champions League trophy to Munich ended in a humiliating exit at the hands of Real Madrid.

This season they have had anything but a smooth route to the semi finals, after overturning a 3-1 first leg defeat to Porto in the quarter finals, but would be confident of progressing should they avoid defeat tonight at Guardiola's home, the Camp Nou.