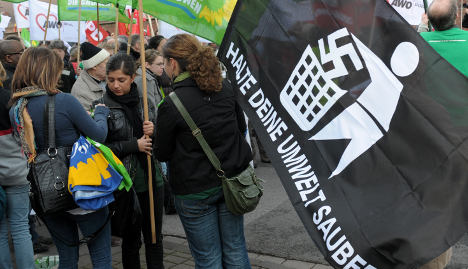 People demonstrate against racism outside a mosque in Duisburg. Photo: DPA

“We see that one can find racial discrimination and prejudices in all parts of society,” Justice Ministry human rights chief Almut Wittling-Vogel told the UN Committee on the Elimination of Racial Discrimination in Geneva.

Committee members said that they had been concerned by reports of from mass xenophobic rallies by movements including Pegida (Patriotic Europeans against the Islamization of the West) and continuing attacks on minorities, refugees and their homes.

They were also worried that Germany wasn't doing enough to integrate migrants into its society.

Just hours after the German representatives had finished presenting to the committee, police raided homes across Germany in search of evidence against a new far-right hate group that planned to attack asylum seekers' accommodation and mosques using explosives.

Wittling-Vogel assured the committee that Germany would fight harder against hatred and racial discrimination, including with tougher legal penalties if necessary.

Fighting racism was a constitutional obligation for the government and the states, and was seen as having an overriding priority by all levels of the administration, she said.

But she added that the government was “happy that we can report on examples of civic engagement before the committee,” pointing out that the number of counter-demonstrators had always exceeded the numbers turning out for Pegida – even at the movement's high point.

On Wednesday, the committee is due to hear representatives from human rights organizations, who are likely to accuse the government of serious shortcomings.

They are expected to say that German authorities define racism too narrowly and see it only in its most obvious form among people active on the political far right.

Countries among the 177 that have signed the Convention on the Elimination of All Forms of Racial Discrimination (Germany joined in 1969) must regularly appear before the committee to explain what they have been doing to fight racism.

The 18 independent experts who sit on the committee will issue a set of recommendations for Germany in around two weeks.