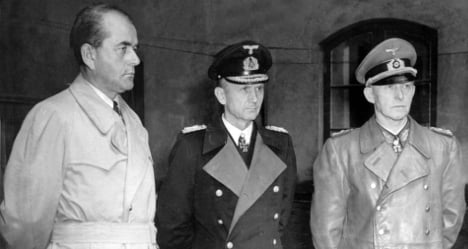 Seventy years later the telex will go on auction in New York, the flimsy sheet of pink paper valued at $20,000 to $30,000, and an incredibly rare relic from the world's deadliest conflict.

In it, Karl Doenitz tells the head of the Luftwaffe, Field Marshal Robert von Greim, that he has signed an unconditional surrender and that all hostilities will cease at 1:00 am on May 9, 1945.

"This was unavoidable in order to prevent the complete destruction of certain parts of the front, which was expected to occur in a short time, and, in so doing, to save as many people as possible for Germany," the telegram explains.

Tom Lamb, history expert and curator of Wednesday's sale at Bonhams, said it was the first German telegram he had ever seen. "The Germans had a scorched earth policy as they pulled out so they burnt, destroyed every piece of paper they had," he told AFP.

"And if they didn't do it, the Russians did it, so the survival of this is extraordinary."

Von Greim received the telegram at 10:40 pm on May 8. He fled Germany and was arrested by US forces outside Prague, the telegram found in his attache case.

It was kept by the interrogating officer of the US Army and is being offered for sale by a private American collector.

Von Greim was to be swapped in a prisoner exchange with the Soviets, but committed suicide with cyanide on May 24, 1945.

Lamb expects significant interest in the document, not only from American buyers by German and British as well.

"This is a very important historical document and it could go to any country that values that," he said.

More than 300 lots of World War II memorabilia, the majority collected by veterans, are up for grabs in the auction. There are flags, uniforms, recordings, notes, cigarette cases and mementos of all kinds from Britain, France, Germany, Greece, Russia and the United States, as well as India, China and Japan.

The most expensive lot is two log books valued at $150,000-200,000 and owned by Robert Lewis, American co-pilot of the Enola Gay B-29 bomber that dropped the world's first atomic bomb.

Lewis, who shunned the spotlight during his lifetime, wanted the items sold only after his death, a wish that his youngest son is working to honor, and to find a publisher for his father's book.

"He didn't want of this stuff to sit in a basement, in a dark room on a shelf in a cardboard box with the door marked museum archives," Steven Lewis said in an interview.

"He wanted the public to know."

The Lewis collection includes his flying logs from 1942-47, plans for the August 6, 1945 Enola Gay mission and photographs.

The atomic bomb dropped on the Japanese city of Hiroshima killed 140,000 people by December 1945. When Lewis saw the huge mushroom cloud, he uttered the famous remark "My God, what have we done?"

Japan eventually surrendered on August 15, 1945, after the Americans dropped a second atomic bomb on the city of Nagasaki.

Steven Lewis says his father was never conflicted about the mission despite the catastrophic loss of life.

"He said 'Steven, I couldn't get over the power' and he said 'I hoped that it would be enough to end the war' and that's the way he felt," the younger Lewis recalled.

"That was a mission that he got chosen because he was the best at what he did and everyone on that crew was."

World War II memorabilia auctions are a relatively new field, but Lamb expects interest to grow as the last veterans pass away and collections shift into second and third generations.

"What I'm trying to do here is to bring to the public attention that this is a valid field," he said.

It was "an extraordinary, extraordinary conflict. There has never ever been a struggle or a battle as long, as involved, as expensive in lives, in money, in the history of mankind," Lamb added.