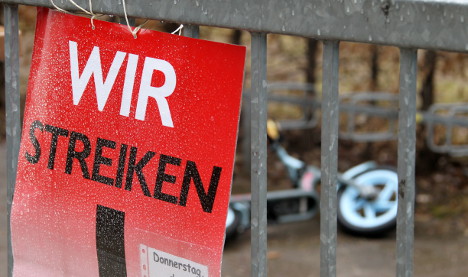 The strikes are to take places after the fifth round of negotiations between Ver.di and kindergarten employers failed.

The trade union announced that the 240,000 teachers and social workers it represents nationwide will take part in the strikes. The union will now have its members vote on how to progress at the start of May.

Already in March and April, across Germany there had been strikes in kindergartens as the union tried to pressure the state into coming to an agreement.

Hundreds of thousands of working parents will now have to make alternative plans for their children's care ín May.

Ver.di spokesman Volker Euskirchen reassured parents that they would give sufficient prior warning about any strikes for them to make alternative arrangements.

“When at least three quarters of our members vote for strikes then parents will once again have to deal with closed kindergartens,” announced the union.

Ver.di is demanding that its members be placed in a higher pay bracket, leading to an average pay rise of ten percent.

Employers consider this demand to be unaffordable. The Municipal Employers' Association estimate that the total increase would be in the region of €1.2 billion.