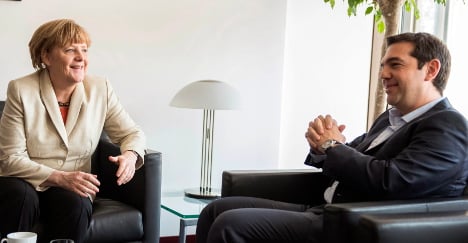 Merkel and Tsipras meet in Brussels on 23 April. Photo: DPA

Speaking on Sunday, the two leaders "expressed their willingness to establish stable communication throughout the negotiations, in order to quickly reach an agreement that is good for both sides," the source said.

Another source spoken to by news agency dpa said that there was a “positive” atmosphere to the conversation between the two leaders.

Greece has been trying to negotiate a deal that would unlock €7.2 billion in remaining EU-International Monetary Fund bailout money that the debt-ridden Mediterranean country needs to avoid default and a possible exit from the euro.

One anonymous EU diplomat told tabloid Bild that "there's a fire and they don't have a drop of water to put it out – it's seriously dramatic!"

In a bid to speed up the stalled negotiations, Tsipras met with Eurogroup chief Jeroen Dijsselbloem.

The so-called Brussels group, which is in charge of the negotiations on Greek's debt, will hold a teleconference with Greek officials Monday, and a second meeting in person on Wednesday in the Belgian capital.

The developments come after EU ministers heaped pressure on Greece Friday to speed up negotiations, after a meeting in Riga last week ended without a breakthrough.

European Economic Affairs Commissioner Pierre Moscovici on Sunday told French radio station RTL: "We will do everything we need to do in order to reach an agreement."

He added: "Greece's place is in the eurozone."

Greek Finance Minister Yanis Varoufakis, who maintained his critical tone in comments published Sunday, told Greek paper Realnews: "Our job is to convince our partners that we are working for profound reforms and a reasonable public finance policy."

"Their job is to give up their sterile attachment to the 'logic' of memorandums (austerity) that has failed," he added.

Earlier on Sunday, Varoufakis had tweeted a quote from US President Franklin D. Roosevelt to illustrate his combative mood.

FDR, 1936: "They are unanimous in their hate for me; and I welcome their hatred." A quotation close to my heart (& reality) these days

Bild suggests that Varoufakis and Tsipras may be playing a game of "good cop, bad cop" with other European leaders – but time is running out for the pair to achieve the result they need.

A survey published Sunday showed that seven out of 10 Greeks want their radical left-wing leaders to reach an agreement with their creditors.

Tsipras swept to power in January on a promise to break with the austerity demanded by Greece's EU-IMF creditors. Defying his paymasters, he pushed welfare laws through parliament last month and has continued to refuse measures agreed by the previous government.

'We will repay our debts'

Pavlopoulos told Der Spiegel that the idea of Greece outside Europe is unimaginable, and that Greece staying in the Eurozone is central to avoiding that.

"We will repay our debts down to the last Euro. We have to maintain a balanced budget and slowly reduce our debts," he said.

He was also critical of the effects on Greece of the programme of austerity in the Eurozone, describing it as "totally anti-growth."

But he toned down the anti-German rhetoric he used before his election in March, saying that he accepted that Merkel and Finance Minister Wolfgang Schäuble want to create a "European Germany" instead of a "Germanized Europe".

Pavloupoulos said he was keen to meet his German counterpart Joachim Gauck to discuss possible reparations for the Nazi crimes against the Greek people.