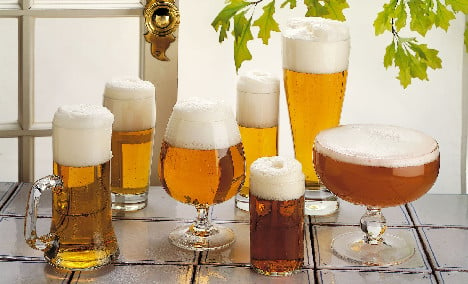 Variety is the spice of life. Photo: DPA

Pilsner accounts for over half of the beer market in Germany. In second and third place are Helles/Export and Weizenbier. Alcohol free-beer is also on the rise.

But there is growing variety in the beer market as an Anglosphere craft beer and micro-brewing craze spreads to Germany.

"The trend is very pleasing. Interest from consumers in the variety of German beer and the tradition and artistry of brewing is growing," said the president of the German Brewers Association (DBB) Dr. Hans-Georg Eils.

One of these is Hops and Barley in Berlin-Friedrichshain, owned by Philipp Brokamp, who spoke to the Local about all things beer.

"The number of microbreweries has doubled in the last five to six years or so, because there is more interest in brewing and people are most keen to know what they are consuming. The rise in popularity is a little bit like organic food shops," he said.

Hops and Barley opened seven years ago in a former GDR butcher's shop, and brews around 30 different beers a year.

Alongside their own interpretations of a Pils, Dunkles and Weizen, they offer a special beer – currently a Maibock, that clocks in at a whopping 7.3 percent ABV.

Brokamp said that although traditional brews like a Pils will always be in demand, some of their special beers are just as popular and sell out very quickly.

The new variety in the German beer market is defying the dominance of long-held traditions in a new flowering of innovation.

He thinks the future is bright for microbreweries because of the flexibility of the smaller quantities. The big breweries even seem to following the trend set by microbreweries, with Beck's having just brought out a craft beer range.

"At the supermarket the selection is about 80% Pils, but the rise of craft beer proves otherwise. The overall share of Pils is going down and things are changing," said Ludger Berges, owner of beer shop Hopfen und Malz.

If things are changing, then some credit must be given to the craft beer scene in the US. Experimenting with beer is more popular in the States and lots of Americans have brought that culture to Berlin, including Vagabund Brauerei, which is run by two Americans.

Anna Orinsky, who works at Vagabund, told The Local about the latest trends:

"Ales are definitely more popular at the moment, especially those with unusual ingredients added (such as the orange and coriander pale ale on offer). But even older styles like sour and smoky beers are making a comeback." An example is Schlenkerla Rauchbier (smoke beer) from Bamberg, northern Bavaria. It smells and tastes a little like smoky bacon, and is a delicious tradition on the comeback.

Beer sommelier Andrea Caswell, who also works there, spoke about the how the niche market drew her to Berlin.

"It's a pretty new scene in Berlin with potential to grow, which is better than trying to catch up in the US or Canada," she said.

Statistically two out of three German men drink at least one Pils every week. While that figure might go down, it will only be because the beer market in the country is flourishing as never before.