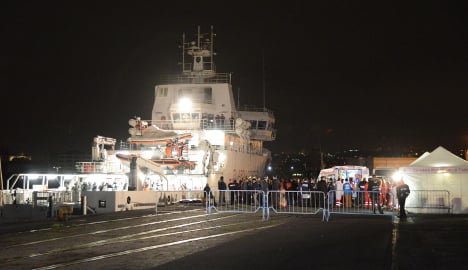 More than 50 politicians, academics, business people and others signed the statement on Thursday calling for "immediate action" following hundreds of deaths of migrants attempting to reach Europe by boat on the Mediterranean Sea.

Among the Germans those who signed the statement were Vice Chairman of Deutsche Bank Group Caio Koch-Weser, former German ambassador to Japan and China Volker Stanzel, as well as political analyst and co-founder of the European Council on Foreign Relations Andre Wilkens.

"Migration is a complex problem that needs a comprehensive and long-term approach, but the first priority for European leaders must be to stop the death toll that is a stain on the conscience of our continent," said the statement, published on the European Council on Foreign Relations website.

"We call on the EU Heads of State and Government to go beyond the ten-point plan issued earlier this week in immediately restoring an expansive search and rescue operation in Mediterranean waters, with a mandate and level of funding that match the humanitarian emergency that confronts us."

The statement added that the EU "must accept that attempts at migration will continue on a large scale and develop a range of measures that reflect our values and responsibilities."

The group called for restoring and expanding search and rescue operations; setting up a system of relocation for migrants throughout the EU; promoting and funding refugee facilities outside the EU; increasing quotas and creating a cooperative law enforcement team to break up trafficking networks.

The statement came on the heels of a meeting of European leaders in Brussels on Thursday to discuss new strategies in the wake of the latest disaster on Sunday, in which hundreds of migrants drowned when their boat capsized on the way from Libya to Italy.

German Chancellor Angela Merkel told reporters before the meeting that the priority must be to save lives.

"We experienced a catastrophe over the weekend and the state and government leaders want to pose the question: How must and can Europe react, uniformly," Merkel said, adding that the leaders would build upon a plan from a ministerial meeting on Monday, addressing people smugglers and the reasons why people flee in the first place.

"But what comes before everything is saving people’s lives," Merkel continued.

"We still have very, very much to do and it is about the acceptance of the European Union of its values worldwide."

A confidential draft for the Brussels meeting obtained by the Guardian revealed that most migrants attempting to reach Europe via the Mediterranean would be sent back through a new rapid-return programme under the EU border agency Frontex.

The Guardian also reported that a major increase in search-and-rescue operations on the Mediterranean would likely not occur, according to the draft, despite pressure to do so.

Frontex director Klaus Rösler was hit by a protester with a bag of jam on Wednesday during a demonstration against the EU's refugee policy.

The initial EU ministerial meeting on Monday called for a "civil-military" response to the crisis in the Mediterranean, and British Prime Minister David Cameron is reportedly considering the deployment of one of the country's biggest warships in a bid to "go after the criminal gangs".

Experts have warned, however, that tackling the problem militarily is doomed to fail.