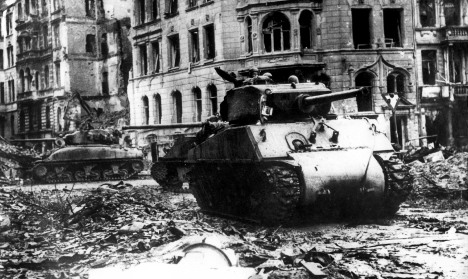 The survey, conducted by YouGov for the German Press Agency (dpa), was carried out ahead of the 70th anniversary of the end of the war on May 8th and interviewed 1,000 people.

It shows that 81 percent of Germans believe that Berlin's actions on the world stage are still influenced by the Nazi period.

Germany's duty towards Israel, the importance of the relationships with France and Poland and the sensitivity of relations with Russia were all cited as being affected by the Second World War.

Only 8 percent of those asked said Germany's current foreign policies have no connection with the Nazi past.

It is clear that the war is not only of historical importance for Germans, but still has an emotional impact on many, too.

Almost half of all respondents (47 percent) said they are emotionally affected by the events of 1939-45, while 40 percent said the war only concerned them for its historical importance.

The survey also shows that privately the war is still a regular theme of conversation, as Germans try to tackle and understand the past.

Only 9 percent of respondents said they had never spoken about the war with their family.

On the other hand 88 percent said they had discussed the fate of their relatives, talked about the historical details of the war, or debated the societal responsibility that it left as its legacy.

Half of respondents said that it is still a recurrent theme at family gatherings, but the number was higher in the former East Germany than in the west, at 57 percent compared with 48 percent.

In western Germany, 36 percent said that while the war used to be a topic of conversation, it no longer is, but in east Germany this number was only 26 percent.

Germans also feel pretty confident that they are equipped with the necessary knowledge to understand what took place during the war.

Seventy-three percent of respondents said they feel well equipped to have a knowledgable discussion about the darkest chapter in German history.

But there were differences between east and west Germans here, too, with 71 percent of respondents from former west Germany confident in their grasp of the details of the war, while 80 percent of east Germans said they knew what they needed to.

In terms of the end of the war and its implications, a large majority (76 percent) perceive the defeat of the Nazis by the Allied powers to have been a form of liberation. Ten percent said that this was not the case.