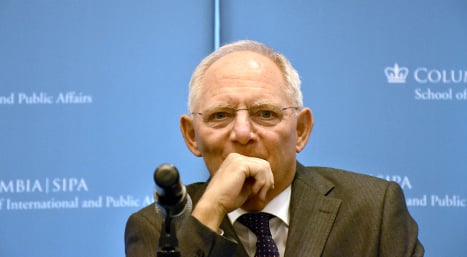 Speaking at an event hosted by the Council on Foreign Relations in New York on Wednesday, Schäuble said “nobody expects that there will be a solution” to the stand-off. He added that it was also highly improbable that an agreement would be reached in the coming weeks.

The main problem is Greece's lagging economic competitiveness, he said. He argued that improvements made in Athens had been "completely destroyed" by the radical Syriza government of Alexis Tsipras which came to power in January.

With the new government, “nobody has any idea how we can agree on a more ambitious programme,” he said.

According to the Financial Times, the prospect of no deal being reached between Greece and its debtors means it is highly likely Athens will now default on its €747 billion of debt.

Schäuble reassured the audience though that the risk of a sovereign debt crisis spreading into other European countries was low.

“I am quite optimistic that that will not happen.”

“We should not expect that Europe will have the highest growth worldwide,” he said, adding that the eurozone will not be the motor of the world economy, but will strive for sustainable growth.

On the current weakness of the Euro, he said that as the economy recovers the strength of the currency will also increase.