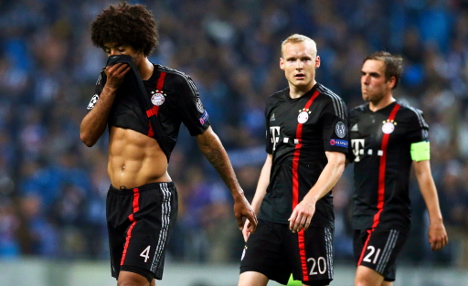 FC Bayern must now win by two clear goals in the return leg at the Allianz Arena in Munich, but if Porto score then they would need three just to take it to extra time.

The reigning German champions were without key players Franck Ribery, Arjen Robben, and Bastian Schweinsteiger – but with one of the best squads in Europe that was no excuse for the dreadful display.

Manager Pep Guardiola will find the awful performance just as worrying as his team's predicament. Error-strewn and lacking in energy, a comeback never looked on the cards.

Just nine minutes on the clock, Bayern were already 2-0 down after two defensive errors from Xabi Alonso and Dante.

Thiago managed to pull one back for the German side in the second half, but another defensive mistake from Jerome Boateng handed the Portuguese team a 3-1 victory.

The self-inflicted nature of the goals sparked on twitter a mix of exasperation from FC Bayern fans, and joy and amusement from almost everyone else.

Defender Dante become a particular target for the sheer comedy of his mistake:

Bayern Munich will be very low today. They did not see that coming. They thought Dante's Inferno was a 14th-century poem.

History is unquestionably against the German champions, as since the away goals rule was introduced, 178 teams have tried to come back from a 1-3 in European competitions, and only three have succeeded (1.69%).

On top of that Bayern have never advanced in a European tie after losing the first leg away from home by more than 2 goals: four KOs in four attempts. Guardiola said after the match: "There's still another leg. We're a bit upset but we have six days to analyse it"

He went on to add that it would be a difficult task in the second leg, but that they would "give it a go", which hardly inspires confidence.

Guardiola is yet to convince on the European stage since joining the German club in 2013, and last year's Champions League campaign ended in a 5-0 humiliation at the hands of Real Madrid.

An exit at the quarter final stage would be seen as a step backwards and would put the Spaniard under severe pressure, despite his managerial pedigree.