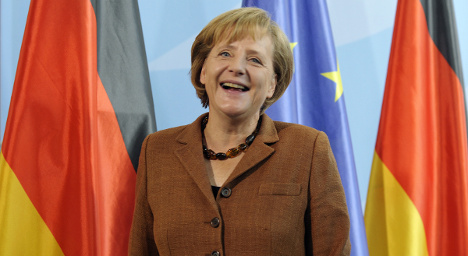 Poroshenko wrote that after he became president and Russia annexed Crimea last year, ushering in the regular presence of Russian troops, Ukraine "desperately needed a strong reaction from the world to the brutal aggression against the sovereign nation."

"This came with the diplomatic effort led by German Chancellor Angela Merkel and her shaping of the Normandy format of talks between Ukraine and Russia," he wrote.

Germany and France were leading efforts "for the peaceful resolution of a conflict that still risks becoming a full-scale war in the heart of Europe," Poroshenko added.

Merkel and Poroshenko are still embroiled in talks with Russia about how to mediate the conflict in Ukraine.

Germany hosted foreign ministers from the Group of Seven in a meeting in Lübeck on Wednesday, where leaders pledged "full support" for Germany's mediation efforts between Russia and Ukraine.

"Throughout this diplomatic effort, during which I have had 60 conversations on the phone with Mrs. Merkel over the past nine months, I have often asked myself: Is it unbending faith, true German persistence, meticulous attention to detail or perhaps a strong combination of all these qualities that drives Angela?" the Ukrainian president continued.

Merkel has been an active part of the mediation process with Russia, but has also made strides in having Germany take on a more active global leadership role, from negotiating a new Greek bailout to involvement in Iranian nuclear talks.

"I vividly remember, when many attempts to agree with Vladimir Putin on a badly needed cease-fire turned out to be in vain, it was Angela Merkel who would go on, calmly saying, 'O.K., but why shouldn’t we go back to discussing?' so that no one could doubt she would walk out with a result," Poroshenko wrote.

This is not the first time Germany's so-called 'Mutti' has graced the Time magazine list. She also made it onto the list last year, with a dedication by US men's football coach Jürgen Klinsmann, as well as taking first place last year on Forbes magazine's 100 Most Powerful Women.