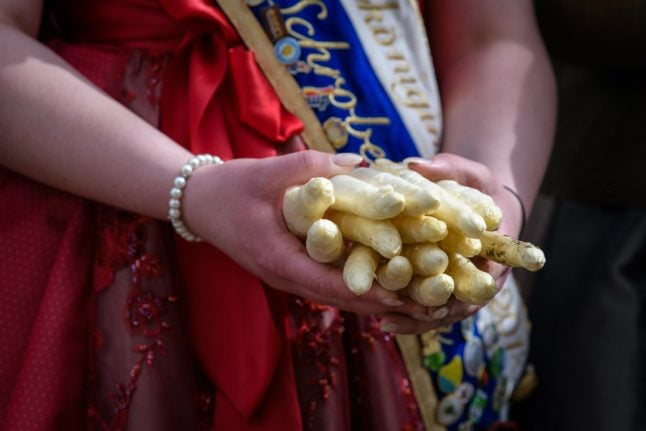 At this time of year small wooden huts start popping up across Germany. In front of churches, in car parks, and by lakes, the little lean-tos almost give the country the feeling of a large shanty town.

The message they all bear is simple. It's just one word. “Spargel.”

But those two syllables are enough to bring beads of sweat to the brow of even the most self-controlled of Germans.

The treasure the huts hold is asparagus, known in German as Spargel or the Edelgemüse, “the noble vegetable.”

The German passion for asparagus is unrivalled. One fifth of the entire arable landmass of the country is dedicated to its cultivation. 55,000 tonnes are produced each year in the short spring season, with a gross value of €175 million.

If you order it from Amazon, it'll cost you €14.98 per kilo – a price more comparable with meat than other vegetables.

A multitude of benefits

But why the obsession? What is it about this phallic root, which squirms around under the knife like a bloated worm, that sets Teutonic pulses racing?

“It's the Spring Euphoria!” Manfred Schmidt, who runs the Asparagus Museum in Beelitz, exclaims to The Local.

Because it's the first fresh vegetable of spring, it gives people a mental boost when they see it on the shelves, he explains.

What's more it is healthy and low in calories.

Then there is the tradition.

“The Gods ate asparagus; kings and queens ate it… and normal people too,” Schmidt laughs.

But there is one other reason for its success.

“Many people say it is an aphrodisiac. There is a saying here that if a newly wed couple are to have a good wedding night, she should eat asparagus and he should eat celery,” the Spargel historian notes.

GALLERY: How to stay sane in asparagus season Asparagus has been growing in the German countryside for millennia. Writing his “Natural History” in the 1st Century, Pliny the Elder noted the many pale stems which protrude through the Germanic soil, reports Die Welt.

In Beelitz, an hour's drive outside Berlin, they have been farming it since 1861. The twists and turns in the town's relationship with the little root trace the story of modern Germany.

Up until the First World War, production grew steadily and in 1908 a co-operative was founded.

During the First World War profits fell, although they recovered in the 1920s as Beerlitzer asparagus was first exported across Europe.

In the 1930s, when the Nazis sent girls onto the land for compulsory service, production continued to grow. By 1939 some 1,000 hectares of Beerlitzer farm land was dedicated to asparagus.

But the Second World War and Beelitz's subsequent location in communist east Germany put an end to the golden years.

The policies of collectivised farming in the 1970s ensured that the farms simply didn't have the manpower to cultivate the white vegetable – it is highly labour intensive since the roots must be cut by hand.

By 1989 the region was such a desperate shadow of its former self that only 10 hectares of land were being used for asparagus production.

But the last quarter decade has seen a spectacular up-tick in the Brandenburg town's fortunes.

Cheap labour from Poland has provided all the manpower the farms need, and production has surpassed pre-war levels.

The Beelitz farms now employ 3,000 temporary workers every year and produce 9,000 tonnes of asparagus on 1,500 hectares of land.

They have even adapted to the cope with strong competition from the former west, adopting the rather quaint practise of crowning pretty young girls as 'asparagus queens.'

“We have had an asparagus queen for about twenty years,” says Schmidt. “They are good for advertising our stuff.”

“We pinched the idea from the Bavarians. In the old days you learned from Soviet success. Now it's the Bavarians,” he jokes.

'One kilo on a plate'

The only question left to answer is how one should best cook one's Spargel.

For Schmidt, it's all about keeping it basic.

Even hollandaise sauce is too frivolous for him.

“One kilo of asparagus chopped up on a plate. Perhaps a bit of ham dripping in butter and some black bread,” he says, definitively.