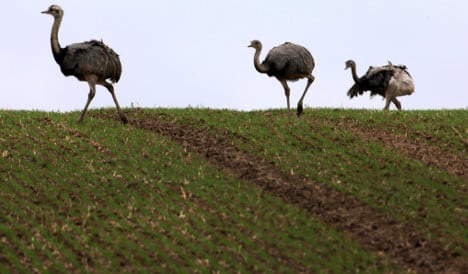 They have almost died out in their native habitat in Brazil and Argentina, but the American Rhea has managed to settle in northern Germany, with the population more than doubling between 2008 and 2015 from around 60 to over 140.

Frank Phillip, an environmental planner who has been tracking the species since 2008, told The Local that the flightless Rhea first entered the German wild when they escaped from a private enclosure near Lübeck in the late 1990s.

From there they crossed the narrow river Wakenitz from Schleswig Holstein into Meckelnburg-Vorpommen.

The enclosures were particularly badly maintained, leading to several jailbreaks over a decade until they were closed in 2008.

The birds, which at maturity can grow to be 1.6 metres tall and run at speeds of 60 km/h, are hunted for their meat in South America, leading to declining numbers.

Mecklenburg-Western Pomerania's environment is quite similar to that of South America, Phillip explained, with the only danger they face being cold winters.

“If it wasn't for two cold winters [between 2008 and now] their numbers would be much higher.”

But as content as the birds seem with their adopted homeland, locals are less pleased.

Petra Böttcher, chair of the farmers union for north-west Mecklenburg, claims that the Rhea are damaging agriculture, reports N-tv.

“They eat the rape seeds and trample them underfoot,” she complained.

The farmers want to be allowed to keep the numbers in check.

“You're not allowed to shoo them away, you've just got to put up with them on your fields,” said Böttcher.

But for Phillip, complaints that the Rhea damage the native landscape are “unfounded rumours.”

The Rhea can find a “long-term home” in Mecklenburg, he said.