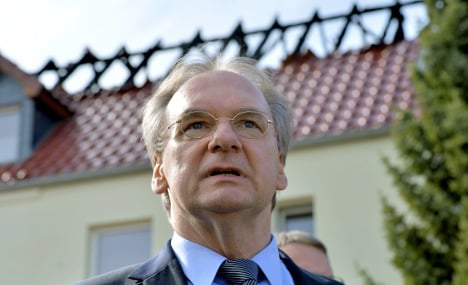 Minister President of Sachsen-Anhalt, Reiner Haseloff, in front of the burned refugee home.

Speaking to Die Welt, Haseloff said “We are talking about a nationwide problem.”

“The number of attacks in the whole country has risen sharply,” said the east German state's most senior politician, cautioning that arson against refugee centres was something that had been seen in other federal states too.

The building in the small town in Saxony-Anhalt went up in flames at about 2 a.m. on Saturday morning.

Renovation work to make it ready for the refugees to use had almost been completed.

Investigators strongly suspect that the blaze was deliberate.

The attack follows weeks of demonstrations in Tröglitz organised by the far right National Democratic Party (NPD) to protest proposals to house refugees from Syria and other war zones there.

In the most recent such attack, in Mecklenburg-Vorpommen on Monday evening several drunk men threw beer bottles at a refugee home. The incident took place in Wismar and involved four men aged between 20 and 22, reports the Tagesspiegel.

“We need to confront this appalling development on the national level,” Haseloff said, arguing that it affected every state from Bavaria in the south to Schleswig-Holstein in the north.

Sounding a note of defiance against the far right, Hasslefof said that kindergartens and schools would be used to house refugees.

“We won't take a single step back,” he said.

"There are the craziest imaginings about how many people are really here with us," she told ARD television on Tuesday morning.

"Everyone should know, the numbers should be on the table much more regularly."

In a survey conducted by the University of Leipzig to track the prevalence of xenophobia and anti-Semitism in German society, Saxony-Anhalt performed worst in comparison with other federal states, reports the Süddeutsche Zeitung.

The survey asked questions such as “When job opportunities are limited should we send foreigners back home?” or “Without the persecution of Jews, would Hitler be considered a great leader today?”

In Saxony-Anhalt, 42.2 percent of respondents agreed with the questions meant to test xonophobic attitudes.

Bavaria came second with one in every three respondents agreeing with xeonphobic opinions. The southern state also showed the strongest prevalence of anti-Semitism.

The researchers pointed out that Bavaria bucks the trend which sees Germans who come into closer contact  with foreigners having less racist attitudes.