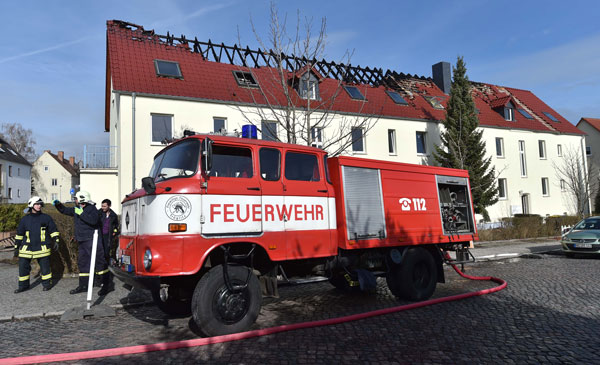 According to officials, one or more people broke into the shelter, which was to house 40 asylum-seekers starting in May, and set the fire at around 2 a.m., probably with lighter fluid or another fire accelerant.

Prosecutors are categorizing the incident as “serious arson” and at a press conference in Halle, prosecutor Jörg Wilkmann said that a political motivation behind the act could not be ruled out.

The fire destroyed the roof of the building. Two people who were in the building at the time, a 50-year-old woman and 52-year-old man, were able to escape unharmed after being warned by a neighbour that the building was ablaze.

“At the moment, everything in this case points to deliberate arson,” Federal Interior Minister Thomas de Maizière told the dpa news agency. “If that is confirmed, it is a heinous act that must be clarified immediately. The culprits belong behind bars.”

Federal Justice Minister Heiko Maas appeared stunned by the incident and on Twitter said “We must again make it clear: refugees are welcome in our country!”

But not all in Tröglitz, in the eastern state of Sachsen-Anhalt, share his view. The town hit the headlines when the town’s former mayor, Markus Nierth, 46, stepped down in March in the wake of threats from members of the far-right NPD, who had vociferously opposed his support of the shelter and promised to hold a demonstration in front of his home.

Nierth said he felt no choice but to step down in light of the far-right danger since he did not feel enough support from officials. His resignation set off a debate over how to protect politicians from demonstrators, especially when threats are made against their families.

On Saturday, Nierth wrote on his Facebook page “I am stunned, sad and furious at the same time. Tröglitz will never recover from this.”

Nierth told dpa said he will offer asylum-seekers a place to live in two apartments he has and that he hopes other Tröglitz residents will also offer accommodation if they can.

"We can’t let the Nazis win in our town,” he said.