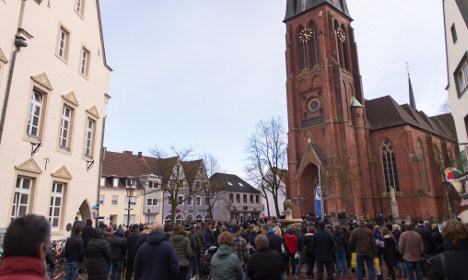 “Everyone in town knows someone who's affected,” Catholic priest Martin Ahls said during the service.

“No-one can grasp this. But support, stick together and mourn together – we can do that.”

The town's Joseph König secondary school lost 16 pupils and two teachers on their way home from a language exchange near Barcelona in the fatal crash in the French Alps.

Hundreds of people stood in the open air outside the church to hear the service, sermon and music being broadcast from the church.

The Süddeutsche Zeitung reported that Mayor Bodo Klimpel praised his townsfolk for the solidarity they had shown one another in the days after the tragedy.

“You are not alone!” he said, addressing the relatives of the victims.

The service took place under a strict photography and filming ban, after harassment by some journalists of mourning people in recent days.

One priest criticized the “curiosity of the media” and the “speculation about cause and motives”.

It followed a blog post by a student at the secondary school on Tuesday, who detailed what he felt was abusive behaviour by the press and asked journalists “please remember the promises you made when your press pass was issued.

“Show that you still feel shame and empathy. Don't try to get the most exclusive images whatever the cost.”

By the end of the ceremony, a sea of tea lights laid by the congregation were added to the 18 candles which stood at the foot of the church's crucifix.