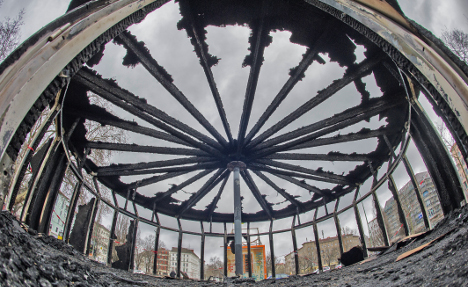 The charred remains of the "House of 28 doors". Photo: DPA

"Today is a sad day for society, but equally we were not surprised", a spokesperson for Refugee Resistance Berlin, an umbrella group for organizations fighting for the cause of refugees in the capital, told a hastily-assembled press conference.

Oranienplatz, a square in Berlin-Kreuzberg, has become a hub for the movement.

The "House of 28 Doors" art project there had great symbolic value thanks to its message of solidarity for refugees striving to reach the European Union.

The building was burnt to the ground in the early hours of Tuesday morning, with police suspecting it to be a case of politically motivated arson.

Only last week the building was broken into and looted, and arson attacks have been common since the start of the movement in 2012, with tents and portable toilets having been previously targeted.

"Not only are we under attack from arsonists, but the police and local politicians as well", said a spokesperson for the movement at a press conference at the site.

Their grievance against local authorities stems largely from the occupation of the Gerhard Hauptmann School in another part of Kreuzberg, which has been occupied by refugees since 2012.

Ever since protests broke out in 2012, occupants of the school have been in conflict with the local authorities, with many evicted from the school.

Vice News documented how the crisis unfolded in the summer of 2014.

Monika Hermann, Green Party mayor for the Berlin district since 2013, has become a main target of discontent and anger over the treatment of refugees in the area.

The website of the movement oplatz.net reported that 10 refugees were evicted from the school on Saturday, and a spokesman told The Local that seven people from the school have been imprisoned.

'The fight is not over'

Despite the feeling of being a constant target, the mood was defiant and forward-looking with a determination to convey the message that giving up was not an option.

"We will continue to fight for our human rights. Germany is a civilized, democratic country but this is no democracy at the moment," said a spokeswoman.

"We have been continuously under attack, but we are still here. You can't evict a movement", she continued.

"Refugees want to get an education and find work; the idea of lots of them being drug dealers or alcoholics is a lie," Kokou Teophil told The Local.

Teophil organizes music sessions for refugees in the local community, which would normally take place in the "House of 28 Doors".

With the house, a pratically useful as well as a symbolically loaded space was destroyed in the arson attack.

"Our main goal is to stay here (Oranienplatz) and continue our work", Teophil said.

Even this is under threat, he continued, because in November the movement will have to apply for a renewal of their permission to use Oranienplatz as a protest space.

Teophil also said that local residents had considerable power in the matter and that noise complaints could influence the decision.

Another spokesman said that the installation would be rebuilt, but finding the funding could prove very difficult.

The only remaining building at the site is now a tiny hut acting as an information centre where refugees can call or visit when they need somewhere to stay.