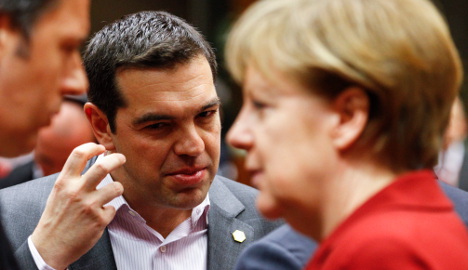 Merkel's spokesman Steffen Seibert said they would not negotiate on a settlement for Greece's debt emergency as this was "not a bilateral" issue but one for the eurozone as a whole.

Rather, the meeting is intended to re-establish trust after a corrosive exchange of recriminations that have left Berlin and Athens resentful and wary.

German Foreign Minister Frank-Walter Steinmeier said after talks with his Greek counterpart late on Sunday that both countries should focus on their shared goal of keeping Greece in the 19-member eurozone.

"We must not allow the doubtlessly weighty and difficult issues that we in Europe need to resolve together to erode the strong foundation of German-Greek relations," he said after meeting Nikos Kotzias.

Tsipras is expected to show Merkel a long list of reforms aimed at restoring his country's finances to health during his Berlin visit on Monday evening.

By making Merkel privy to his plans, he hopes to convince her of his government's seriousness about tackling Greece's massive problems with tax evasion and cronyism.

Government sources in Athens said the reforms will include a mix of tax increases, privatisations of state-run businesses and moves to target tax dodgers.

Tsipras also plans to increase the pensionable age to 67 years, only allowing those who have already worked for 40 years to retire at 62.

Tax offices will also call on all Greeks who have tried to conceal money abroad to report to local branches.

“We know who they are and will give them a last chance to save themselves,” a high-ranking official in the finance ministry told DPA.

Tourists visiting Greek islands in the Aegean Sea, such as Mykonos and Santorini, will also pay an increased value-added tax (VAT).

Hotel VAT and duties on tobacco and alcohol products will also be increased.

Meanwhile the Financial Times reported on Monday that Tsipras sent Merkel a letter on March 15th warning that Greece would not be able to continue servicing its debts without EU help.

The newspaper said it has a copy of a letter dated March 15 in which Tsipras "warns that his government will be forced to choose between paying off loans, owed primarily to the International Monetary Fund, or continue social spending."

"With this letter, I am urging you not to allow a small cash flow issue, and a certain 'institutional inertia', to not turn into a large problem for Greece and for Europe," Tsipras wrote.

"This is not a threat, it is reality," Sakellaridis told Mega TV, adding that Tsipras had sent a similar letter to French President Francois Hollande and European Commission chief Jean-Claude Juncker.

"The letter said nothing less and nothing more than what we have said since last week… that liquidity is tight and that political initiatives must be taken."

The Greek leader has blamed Merkel's insistence on tough austerity for his country's "humanitarian crisis" of poverty and mass unemployment.

Merkel, for her part, insists that if cash-strapped Greece wants more bailout loans, the biggest share of which is financed by Germany, it must accept the bitter medicine of spending cuts and reforms.

Meanwhile German taxpayers have grown increasingly frustrated with attacks from Greece, where both Merkel and her exacting finance minister Wolfgang Schaeuble have been caricatured as Nazis.

A poll this month said more than half of Germans believe Greece should leave the eurozone. Greece's creditors agreed in February to extend its €240-billion bailout by four months in exchange for promises of further reforms.

At an EU summit last week, Greece lobbied Brussels to release vital funds to help it make payments to creditors in the coming days, and avoid bankruptcy and a possible exit from the euro.