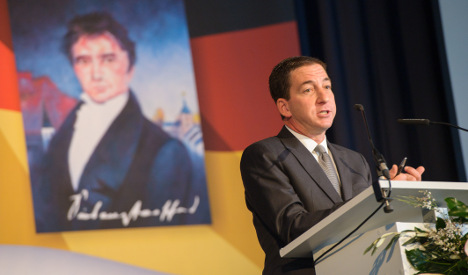 Writing at The Intercept, Greenwald said he was told of the threats by Vice Chancellor Sigmar Gabriel after an award ceremony in Homburg on Sunday, where the journalist received the Siebenpfeiffer journalism prize.

"They told us they would stop notifying us of plots and other intelligence matters," Gabriel said.

"If the threat were carried out, the Americans would literally allow the German population to remain vulnerable to a brewing attack… by withholding that information from the government," Greenwald wrote.

In his own speech at the Siebenpfeiffer event, Gabriel said he regretted the fact that Snowden had finally been forced to seek safe haven in Russia.

But this is the first time a government official has clearly said that there were threats from the US in the Snowden case, which became the subject of widespread campaigning among the German public following news that Snowden had applied for asylum here. It emerged in a parliamentary answer in November that Snowden had given up on his application for asylum in Germany.

Greenwald points to a similar case where the British government was threatened with an end to intelligence sharing if it obeyed a court order to provide documents to the lawyers of a man suing it for wrongful detention at Guantanamo Bay.

Britain is not above resorting to such threats itself, menacing Germany's Bundesnachrichtendienst (foreign intelligence agency, BND) with ending intelligence sharing if it co-operated with a parliamentary inquiry into spying.

The head of that inquiry recently revealed that his phone had been physically tampered with after he suspected that it had been hacked remotely.