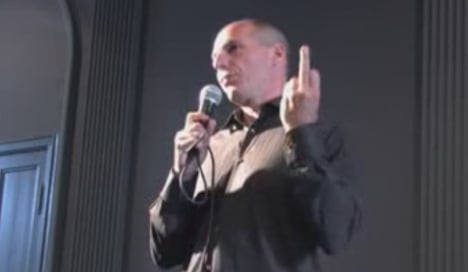 Jan Bohermann, host of satirical programme "Neo Magazin Royale" on public broadcaster ZDF, claimed he had been waiting since Sunday for someone to ask him if he had faked the controversial footage, but no one had questioned him.

"Sorry Mr Varoufakis, we won't do it again," he said, detailing how a production team had manipulated the video.

The footage showed Varoufakis before he became finance minister speaking at a 2013 event in the Croatian capital of Zagreb.

In the "doctored" images, Varoufakis talks about the problems facing his debt-laden country, and says "stick the finger to Germany" as he makes the offensive gesture.

But a check of the original footage, tweeted by Varoufakis on Monday, shows that the offending finger is in fact still there:

ZDF television confirmed on Thursday morning that Böhmermann's video had itself been a fake, quieting frenzied online discussion using the hashtag #Varoufake – Germany's top Twitter trend of the day.

"We see ourselves forced to identify Neo Magazin Royale as a satirical show in future," programming director Norbert Himmler said.

"Jan Böhmermann is certainly going to be out of consideration as anchorman of the daily news."

Varoufakis again took to Twitter on Wednesday night to thank Bohermann for making light of the scandal.

@janboehm Humour, satire & self deprecation are great solvents of blind nationalism. We politicians need you badly.

In hindsight, Böhmermann's tone throughout the video should have been a clue to the fact that he was making a joke.

"It really strikes a chord. That's how we Germans work.

"Devastating Europe twice within a century, but going nuts when somebody gives us the finger.

"No more objective discussion is possible."

He goes on to address the editors at the Günther Jauch talkshow, where Varoufakis was confronted with the footage on Sunday evening.

"Dear editorial staff of Günther Jauch, Yanis Varoufakis is wrong, you did not falsify the footage.

"You simply took it out of context and gave him the runaround, so that the average German could pursue their passion for being angered."

Varoufakis, who took part in a live discussion with other guests via a link from Athens, insisted on air that the video had been "doctored".

Jauch's show, which draws millions of viewers, said Monday it had seen "no indication whatsoever of manipulation or falsification in the video shown during the live show".

It said the video was being further checked by experts.