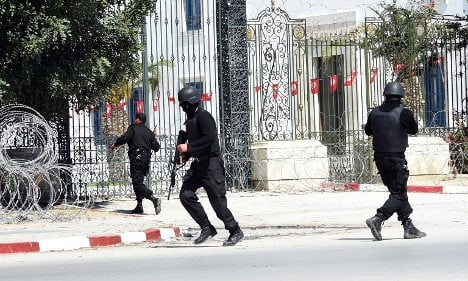 Officials reported that two gunmen had been killed and 22 tourists as well as two Tunisians had been injured in the attack at the museum, in the west of the capital Tunis.

Gunmen in military gear reportedly stormed the museum, killing some and taking others hostage, The New York Times reported.

An unknown number of museum visitors were freed when security forces stormed the building, killing two gunmen and leaving one policeman dead.

Mohamed Ali Aroui, spokesman for Tunisia's interior ministry, earlier on Wednesday told Radio Mosaique one of those killed was Tunisian but did not disclose the nationalities of the other victims.

17 tourists among 19 killed in an attack on the Bardo museum in Tunisia, according to Prime Minister Habib Essid pic.twitter.com/rbJA3n1oNY

Security sources told the Wall Street Journal an additional 38 people had been injured in the attack.

At least two men reportedly stormed the building after attempting to attack the nearby parliament building.

European Council president Donald Tusk issued a statement offering his condolences to the families of those were died.

"I am shocked by today's terrorist attack at the Bardo museum in Tunis. My thoughts are with the families of those whose loved ones have been killed, including several European Union nationals, and with the Tunisian people," Tusk said in the statement.

"The European Union and Tunisia will not be intimidated by terrorism, at home or abroad," Tusk added.

"We are ready to support the Tunisian government in its actions against violent extremism and commend its speedy action to free the hostages involved. The European Union stands with Tunisia in its commitment to peace and democracy. We will not be deterred in the face of such brutality."

Cruise ship company Costa Crociere said one of its liners, with 3,161 registered passengers, was docked in Tunis at the time of the attack.

"On the occasion of today scheduled call some guests on cruise on board our Costa Fascinosa had a tour in the city. All the shore excursions organised by Costa during today stop in Tunis have been immediately recalled on board," the company said in a statement.

The Bardo museum is internationally-renowned for its collection of mosaics and is visited regularly by groups of tourists, many disembarking from Mediterranean cruises.