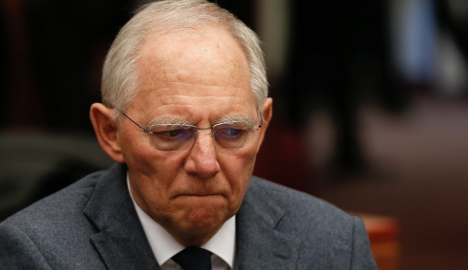 “They've destroyed all trust. It's a serious setback,” Schäuble said in Berlin.

He added that he didn't know anyone in the international institutions who understood what Athens was planning, and accused the radical-left Syriza government there of lying to their citizens.

Schäuble himself has been the target of repeated verbal sallies by members of the Greek government, while calls for Germany to pay reparations for war crimes committed during the Nazi occupation of the country have grown.

Tsipras' visit to Berlin next Monday is intended to calm the waters between the two countries, as the Prime Minister steps forward to negotiate in place of Finance Minister Yanis Varoufakis.

He will also square off against Merkel and his other Eurozone creditors at a meeting of EU heads of state and government in Brussels on Thursday and Friday.

Foreign Minister Frank-Walter Steinmeier warned at a meeting with the Greek deputy Foreign Minister Nikos Chountis that the Greek government should not try to depict its problems as simply an argument with Germany.

“I implored him to work towards us having the possibility of speaking about proposals from the Greek government,” he said in Brussels on Tuesday.

Now even members of German political parties agree that some restitution should be made.

Gesine Schwan, chairwoman of the Social Democratic Party (SPD) values committee, told Der Spiegel that “it would be good from the German side if we sweep in front of our own door.

“It's about recognizing that we committed grave injustices in Greece,”

But SPD deputy leader Ralf Stegner argued that “we shouldn't couple the question of reparations with the current debate over the Euro crisis.”

The SPD were joined by the Green party, with parliamentary leader Anton Hofreiter arguing that “Germany can't simply sweep the demands from Greece off the table.”

“This chapter isn't closed either morally or legally,” he added.

Greece argues that Germany owes it on two fronts.

The first is a loan of 476 million Reichsmarks forcibly extracted from the country by the Nazis in 1942, and now valued at between €8 billion and €11 billion.

Nazi atrocities such as the Distomo Massacre, where SS troops murdered 218 women, children and old people in 1944, have also left lingering resentment and demands for compensation, despite a payment of 115 million Marks in the 1960s.

Meanwhile Greek Finance Minister Yanis Varoufakis took to Twitter to defend himself against allegations that he raised his middle finger to Germany before taking office.

The gesture was taken out of context, he argues, as it formed part of an hour-long lecture he gave in 2013 about the early days of the financial crisis in May 2010 – before Greece owed Germany any money at all.

And here is the 'undoctored' by the unscrupulous media's video: https://t.co/WZ3ixfKHC5