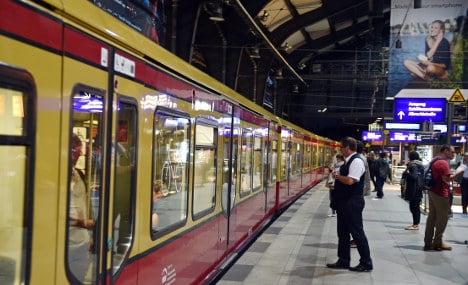 “Due to the stoppage, over 70 S-bahn trains and over 50 regional and long distance trains were delayed or redirected,” a spokesperson for the Berlin Transport Company (BWG) told the Berliner Zeitung.

The 20-year-old man climbed onto a train at the busy centrally located station shortly after 1pm. From there he managed to clamber onto the roof of the Friedrichstrasse station.

The man, who has already been in psychological care, proceeded to wander from one side of the roof to the other.

S-bahn line 5 was stopped from travelling past the Zoological Garden station to the west and Alexanderplatz to the east.

About 320 passengers in an S-bahn train, which was stuck between Hakeschermarkt and Friedrichstrasse, had to wait for over an hour before they were let out of the train.

“We couldn't rule out that he would jump onto the tracks of the regional train services or onto the electricity cables,” a spokesperson for the Berlin police told the Berliner Zeitung.

Shirtless man at Friedrichstraße on the way down. pic.twitter.com/I2QE45ZTnN

It took the police, fire services and the young man's psychologist several hours to persuade him to come down.

Eventually, at around 4pm, he was taken from the roof with the help of a hydraulic lift.

At 4.20pm the trains started to run on the affected lines again.