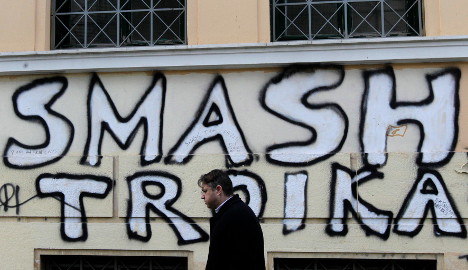 Graffiti against the 'Troika' of European Commission, IMF and European Central Bank in Athens. Photo: DPA

In a survey conducted by the Politbarometer of the Mannheim Research Group, 52% of respondents said that Greece shouldn’t stay in the eurozone, 40% said Greece should, and 8% weren’t sure.

This result comes just a few weeks after a previous survey showed that only 40% of Germans wanted Greece to leave the eurozone – a worrying trend for the Greek government of Alexis Tsipras and Yanis Varoufakis.

Top-selling tabloid newspaper Bild has run a campaign against further financial aid to Greece, which included a huge 'NEIN' to bailout extensions on the front page in February. This has been widely credited with helping sour the public mood.

The sharp rise in negative public attitudes towards Greece comes as open war has broken out between the political classes in Berlin and Athens.

In an interview with an Austrian TV channel, the Finance Minister, Wolfgang Schäuble, said that he 'can't rule out' the possibility of Greece leaving the eurozone.

Asked by the interviewer, whether he was in agreement with his Austrian counterpart Hans Jörg Schelling that an unplanned Greek exit from the single currency was possible, he said: “Because the responsibility to decide what happens lies in Greece alone, and we don't know what the government in Greece will do, we can't rule it out.”

Meanwhile Interior Minister Thomas De Maizière demanded on Thursday that Greece explain a threat made by its defence minister to send refugees to Berlin.

We will ask very precisely what the official position of the Greek government is on this issue,” de Maizière said at a meeting of the EU-Interior ministers council in Brussels on Thursday evening.

“If it was so that migration and refugee isssues were being mixed with the debate on financial aid, that would receive a very clear answer from us,” Die Zeit reported the interior minister as saying.

The Greek defence minister, Panos Kammenos, threatened on Sunday to dump refugees in his country on Berlin if Germany did not support Greece in debt crisis talks.

"If they deal a blow to Greece, then they should know the the migrants will get papers to go to Berlin," Kammenos told a meeting of his right-wing party, Independent Greeks.

He also said that if some of the refugees were members of the terrorist group Isis, it would be Europe's fault because of its position on Greece's economic problems.

The answer came from the deputy minister for immigration, Anastasia Christodoulopoulou at the meeting of EU interior ministers on Thursday evening, reports the Süddeutsche Zeitung.

She explained that the statements of the defence minister were “not the position of the Greek government.” Greece feels itself bound to the European rules on refugee issues, said Christodoulopoulou.

On Tuesday one of the most controversial elements of the dispute between the two countries took place when Greek Prime Minister Tsipras made a  demand for German war reparations which was subsequently unanimously approved by the Greek parliament.

A personal spat between Schäuble and Varoufakis has also been simmering in the background.

On Thursday the Greek ambassador in Berlin made an official complaint to the foreign ministry about the behaviour of Finance Minister Wolfgang Schäuble towards his Greek counterpart, Yanis Varoufakis.

The Ambassador claimed that Schäuble had called Varoufakis naïve.

Schäuble has denied the accusation.